Join the Vikings in battle once more as this time around they take on a horde of evil Sirens!
casino game review slots vikings go berzerk vikings go to hell vikings go wild yggdrasil gaming

This slot is a sequel to the smash-hit Yggdrasil Gaming slot Vikings go Wild. Time has passed a great deal but the Vikings are still as crazy as ever as instead of fighting huge sea serpents like in the previous game, they are now fighting against a bunch of nefarious Sirens! So get ready to climb aboard one of the Viking ships and sail into battle out on some very choppy waters but be sure to bring some earplugs so the enchanting Sirens don’t put you in a trance! 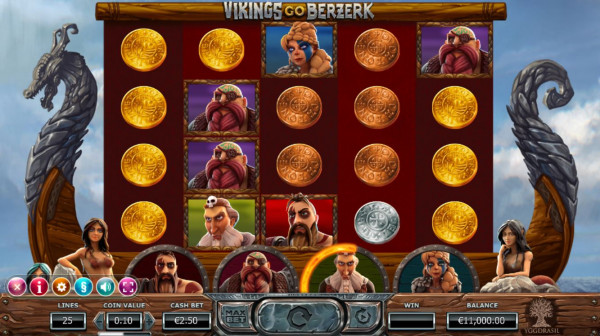 The first feature to mention is the Wild symbol which is represented by a Viking shield with the word ‘Wild’ displayed inside of it. Like most Wild symbols, its main function is to substitute for all other symbols apart from the Free Spin symbol to help form winning combinations on the reels.

At the bottom of the reels, you will notice 4 Vikings each with a meter displayed above them. Whenever you form a win involving one of these Vikings then you will fill up their Rage meter. The more rage collected then the bigger the wins you will be awarded. When a Viking’s Rage meter is full then you will be awarded 7 Free Spins and the Viking that triggers Free Spins will be in Berserk mode for the feature. It is important to highlight that Vikings who go Berzerk will always win (turn Wild) against the Sirens in Free Spin mode. There is also a Welcome Rage feature which fills the rage meter to more than 50% when you play the game for the first time.

The standout attraction of the game is the highly lucrative Ragnarök Free Spins feature. This can be triggered via landing the Golden Chest symbol and can also be awarded as a random bonus when you trigger Free Spins. In this feature, all Vikings are Berzerk and will always turn into Wild symbols which greatly increases your chances of landing a huge payout on the reels.

The graphics are visually stunning and what you might expect from leading software studio Yggdrasil Gaming. All of the Vikings from the previous game have been given a stylish makeover and look better than ever before. The game is set on board a Viking ship with the Vikings appearing just below the reels along with a bunch of Sirens beside them. Symbols are nicely designed and consist of 4 different looking Vikings and a variety of gold, silver, bronze, and black coins. The animations are impressive as symbols light up in an orange flame effect when part of a winning combination and there is an excellent intro video to enjoy when you load the game up for the first time.

The music is dramatic and atmospheric with lots of rolling drum effects. It complements the fantasy theme of the game nicely.


Our Verdict on Vikings go Berzerk

Yggdrasil Gaming produced this epic slot and it’s a more than a worthy successor to the excellent Vikings go Wild game. Vikings go Berzerk is really simple to play, features amazing graphics, and contains a decent amount features to keep the action ticking over nicely. The most lucrative feature in the game is without a doubt Ragnarök Free Spins and triggering this bonus can be quite difficult but the rewards can be huge considering that all Vikings turn Wild to really boost your chances of landing a huge payout. I found this slot to be of High variance so you will have to endure quite a few dry spins while waiting for a big payout to land. For slots with a similar Viking theme, check out Viking Runecraft and Vikings Storm.

Defeat the evil Sirens to claim a huge fortune in Vikings go Berzerk!