Viking Runecraft from Play'n GO: Slot Review - a gift from the Norse Gods!

Set sail to Valhalla where you will face the wrath of the Gods as you try to stop Ragnarök!
casino game review play'n go slots viking runecraft

Norse mythology has a rich and deep history especially when it comes to online slots. Many software developers have created games revolving around the various Norse gods to great success lately. Play’n GO decided to have a crack at this theme and they based this game on the most popular Norse gods including Odin, Thor, and Loki. So get ready to set sail with a band of fearsome looking vikings as they travel to Valhalla and attempt to stop Ragnarök from ever starting.

The slot is played on a 7x7 grid and it comes with Wild Multipliers, Cascading Reels, Free Spins, 4 Charges of Destruction and 4 Gift of the Gods features. 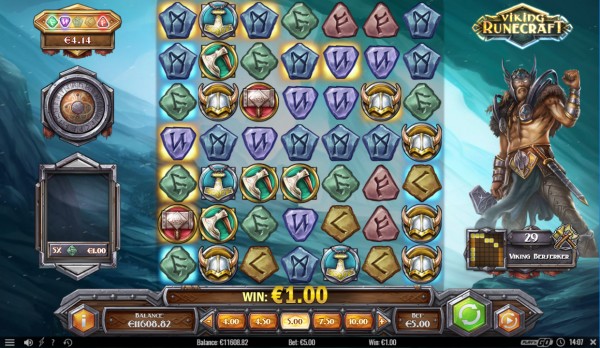 The first feature that I came across while playing this game is that it features cascading reels. These reels involve symbols dropping down on top of each other and when you win, the winning symbols will disappear to give way to new symbols. What this essentially means is that you can win again and again each time you press the spin button. Wins are formed when you land 5 or more of the same symbol in a connected cluster either vertically or horizontally.

Every time you land a win on the reels, you will charge a meter on the left-hand side of the reels which gives you access to 4 Charge of Destruction features when it is fully charged. The games are as follows:


When the Charge of Destruction feature ends, the charge meter will charge up again and you will trigger the Ragnarök feature where you will be awarded 1 Free Spin. It is also possible to activate this feature by simply double charging the charge meter. During this feature, the Charge of Destruction meter is replaced with an End of the World bonus meter. With this new meter, it is possible to win multipliers ranging from 2X all the way up to 15X!

Viking Runecraft comes with 4 different Norse Gods. In order to see each God, you will need to clear patterns of each God as you play the game. To clear a pattern, you need to form wins on specific grid positions. If you clear a pattern, then you will move to the next level where you will encounter the next God.

The game also features a Gift of the Gods mode. This is a random event that occurs when you land a non-winning spin. It creates Wild symbols to further enhance additional winning combinations. All Wilds that are created will substitute for any other symbol. The Wilds are as follows:

That is not all as there is one last feature to discuss! The last feature is the Runes of Valhalla bonus game. During each spin, you can collect up to 5 different Rune Stone symbol winning combinations. Collect 1 Rune Stone symbol win combination and clear the current active pattern to trigger the Runes of Valhalla bonus game. In this feature, a wheel will spin where you need to hit any field with an active and lit rune to win the accumulated bonus amount. The more symbols you collect, the higher your chances of winning increases. However, it is worth noting that collected symbols reset to zero when the bonus game begins.

The presentation of this game is simply stunning as the graphics are beautifully displayed onscreen. A Viking God stands next to the reels and more than likely it is Thor because he wields lightning from time to time as you play the game. Symbols are bright and colourful and consist of various Viking equipment such as helmets, axes, and hammers. The symbols cascade and animate wonderfully whenever you press the Spin button as they drop down and disappear in a poof of smoke when you land a win.

The game features an epic score that suits the theme of the game perfectly. It is fast and upbeat and ramps up the tension as you battle it out with the Norse Gods.

Our Verdict on Viking Runecraft

Viking Runecraft is made by Play'n GO and it's one trip to Valhalla you won’t forget anytime soon! The game is absolutely beautiful to look at and really easy to play once you get the hang of things. It is jam-packed full of fantastic bonus games that offer highly lucrative payouts and also countless hours of entertainment. This slot is of High variance but do not let that deter you as if you have the luck of the gods then it is possible to get maximum wins of up to 5,000X!

Defeat the Norse Gods for a bountiful treasure in Viking Runecraft!