Join an immortal Sheriff in the Wild West as he protects his town from a bunch of bandits in this excellent slot from Play'n GO.
casino game review golden colts play'n go slots

It’s time to saddle up and head back in time to the Wild Wild West albeit with a dark twist in this latest title from top software studio Play’n GO. This game focuses an immortal Sheriff who watches over his town with a magical pair of Golden Colts in his holster. The town is going to need his protection as a bunch of rogue bandits known as the Ace-High Gang has arrived on the scene who intend to his steal his guns as well as wreak havoc everywhere. Let’s join the Sheriff on his latest patrol and see if we can nab a nice cash payout on the reels as he takes down the Ace-High Gang one by one with his legendary Golden Colts. 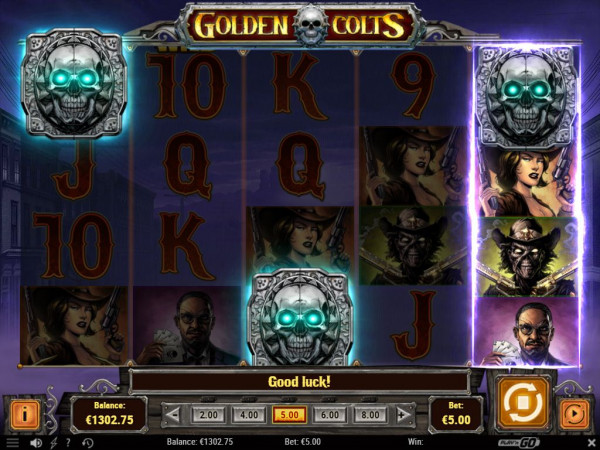 The first feature to highlight is the obligatory Wild symbol which is represented by the skull of a bull. This symbol substitutes for all other symbols on the reels apart from the Scatter to help create winning combinations. It is also the highest paying symbol in the game as if you happen to land 5 of these symbols on an active payline then you will win a fine payout worth 12.5X your initial wager.

The Scatter symbol in this game is illustrated by a silver skull with eerie glowing eyes. Land 3 of these symbols anywhere on the reels to trigger the special Bonus Game. Once activated, the Golden Colts’ cylinder will roll and then randomly award one of the following 7 bonus features:

We should also mention that during the Free Spin features, the Scatter symbol will not appear on the reels.

This game features spectacular visuals and effects which is exactly what we have come to expect from leading software provider Play’n GO. The game takes place in a rather dark and moody atmosphere as it is set inside a town with an eerie purplish night sky overhead and lightning setting the screen alight every so often. Symbols are expertly designed and consist of a Wild Bull, a Possessed Sheriff, the Ace-High Gang, along with classic A – 9 playing card symbols. The animations are smooth as symbols are highlighted by a bright stream of electricity when part of a winning combination. I especially like whenever you trigger the Bonus Game how the sky turns to a crimson red setting as the chamber of the Golden Colts revolve and then shoot to award one of the 7 Bonus features.

The music is atmospheric with lots of deliberate slow guitar strum sounds. It fits in perfectly with the Western theme of the game.


Our Verdict on Golden Colts

This slot comes from slot specialists Play’n GO and to be honest, it is one of the best Western-themed games we have ever played. Golden Colts has it all as it features outstanding graphics, action-packed gameplay, a top-notch soundtrack, and a slew of exciting bonus features. The star attraction of this slot is without a doubt the Bonus Game feature as you can enjoy up to 7 different randomly awarded Free Spin features here. Thankfully, it is quite easy to trigger with the Ace-High Gang feature being the most profitable as you can benefit from massive 4x4 Mega Symbols on each Free Spin. The Most Wanted feature is great fun too and highly rewarding if you trigger it but try your best to stay away from the “X” icon when clicking on those posters! The top prize for this game is a very good 2,500X your wager which can be won on any spin. Variance-wise, I found this slot to be Medium so you won’t have to wait too long until the Zombie Sheriff awards you with a nice payout on the reels! For slots with a similar Western theme, check out Wild Wild West and Sticky Bandits.

Tame the Wild Wild West to win a ghostly fortune on the reels in Golden Colts!