Gemix from Play'n GO: Slot Review - you may not be able to leave this game alone!

This video slot game isn’t a slot like any other. Players have to match the symbols, which feature on a 7x7 grid of shape symbols, in patterns. Only then do they advance to the next level, of which there are many.

Beware, though, Play'n GO has managed to create a truly addictive gaming experience. With Gemix being incredibly payable, players will be tempted to keep going. 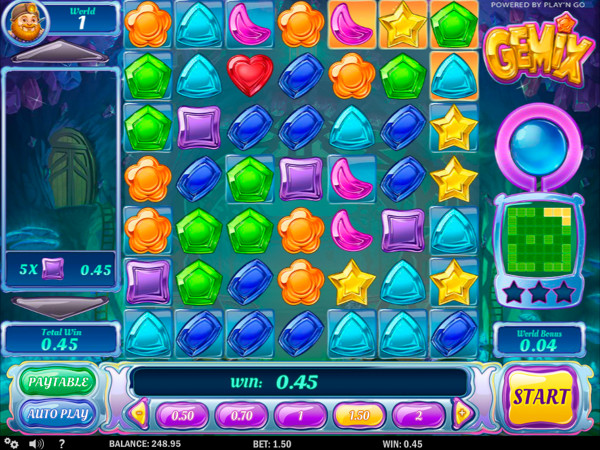 The idea behind Gemix is rather simple. Make groups of five or more gems of the same colour. Games which match, in any way, except diagonally, will make room for new gems to drop into that space and form new combinations. There are, however, some bonus features, which add some sophistication to the game.

Upon collecting 20 or more gems in one spin, bonus features are unlocked. One of my favourite ones is called Nova Blast, which acts almost like a wild. One gem explodes and destroys all adjacent symbols. Also great is the Light Beam feature, which true to its name, blasts a ray of light both diagonally and horizontally through the grid. The gems the light beam hits are then transformed into matching ones.

Furthermore, if a player collects more than 40 gems, his winnings on the current spin a multiplied three-fold. Hit that one a few time, and you will be convinced of how profitable Gemix by Play'n GO is. As noted above, there are several levels, so-called worlds, in Gemix. The great advantage of progressing through the worlds is the 'World Bonus' which increases with every level slightly, making it more profitable, the longer you play.

Gemix, developed by Play'n GO, is just the kind of game one expects to find in an arcade. The jolly colours match an uplifting tune. Its features are reminiscent of recent Facebook hit, Candy Crush.

As noted above, this slot game is slightly addictive. With that in mind, players should exercise caution. Setting aside a percentage of winnings with each and every wager can help keep control of a player's game. If all is going well, I keep going; if I am facing an unlucky streak, I tend to stop. However, given that Gemix comes with relatively good odds, there is likely no need for this.

Our Verdict on Gemix

Love it! The colours and the jolly theme cheer players up. This is immensely important when playing in online casinos. Play'n GO has created quite a playable game, which attracts loads of players. Understandably so!