Take a trip to the Land of the Rising Sun and step inside the ultimate training ground for only the fiercest and skilled warriors in this latest release from Yggdrasil Gaming. The dojo in this game is run by the legendary sensei, Hattori Hanzō who was a famous samurai credited with saving the life of Tokugawa Ieyasu who was, in fact, the founder of the first shōgun. Hanzō then helped Tokugawa Ieyasu become ruler of united Japan and is still an iconic figure in modern Japanese culture to this day. Read on to find out how we fared as Hanzō put us through our paces a range of gruelling battles and exercises! 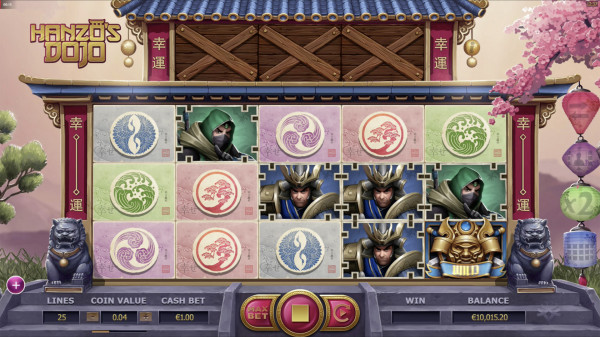 The first special feature to highlight is that this game features a mini-slot which is placed just above the top of the reels. This is known as the Rooftop Slot feature and can award 3 different prizes depending on which symbols land in the mini-slot. Prizes include:

Manage to land 3 Expanding Wilds and you will trigger 3 Hanzo Spins with a massive 3x3 Wild symbol locked in the centre reels. During Hanzo Spins, the only available symbols in the Rooftop Slot are the blank symbol and the Free Spins symbol. The Wild symbol in this slot is depicted by an image of a golden samurai helmet. It replaces all other symbols except the Scatter symbol to help create winning combinations.

The Scatter symbol is represented by an image of an ornate gong. Land 3 of these symbols anywhere on the reels to trigger the Free Spins feature. Each Scatter that lands on the main reels awards 3 Free Spins so if you land 3 Scatters to trigger the feature then you will receive 9 Free Spins. If you trigger Free Spins using 2 Scatters from the main reels and one from the Rooftop mini-slot then you will receive 10 Free Spins plus 1 booster bonus as the mini-slot symbol awards 4 Free Spins plus a booster instead of just 3 Free Spins. During Free Spins, a colossal 3x3 symbol of one of the fighters will appear on the middle 3 reels giving you a much better chance to form winning combinations with that symbol.

There are 5 different Free Spin Boosters that can be activated by landing Free Spin symbols in the mini-slot or during Hanzo Spins to really boost your chances of landing a big win on the reels. These include the following:

The game is visually stunning to look at as it features beautiful 3D graphics and effects. Hanzo’s Dojo takes place in front of a dojo surrounded by swaying cherry blossoms and lush green trees. Symbols are intricately detailed and consist of Hanzo, a Samurai, a Sumo, a Ninja, a Female fighter, as well as circular icons depicting Bonsai Trees, Waves, Winds, and Cranes. The animations are slick as symbols speed up and down the reels and pop nicely when part of a winning combination. I really like how the mini-slot works in tandem with the main reel set whenever you spin the reels. It’s very original and certainly different from your more traditional online slots.

The music is relaxing with a soothing Asian soundtrack. It complements the Japanese theme of the game perfectly.

The game has 25 paylines, a respectable RTP of 96.1%, and a wonderful maximum payout worth 4,000X your initial wager.


Our Verdict on Hanzo's Dojo

This game is produced by award-winning software producer Yggdrasil Gaming and is a thrilling gaming experience we thoroughly enjoyed from start to finish. Hanzo’s Dojo features beautiful 3D graphics, an epic soundtrack, as well as a superb set of bonus features to keep players spinning those reels again and again. The Rooftop slot is a clever addition to this game as it ensures players keep an eye on two sets of reels and not just one. I was able to trigger the Free Spins feature quite early on and this feature offers unbelievable payouts especially when you have a few boosters in play such as Wild Reels and Colossal Nudging symbols! In terms of variance, I found this slot to be Medium so don’t expect to take a big hit on your bankroll when you play this game. For slots with a similar martial arts theme, check out Samurai Split and Super Sumo.

Kick and punch your way to a massive payout when you enter Hanzo's Dojo!