Get ready to blast off into space for some top-notch high-rolling casino action at the super exclusive Cazino Cosmos in this new release from Yggdrasil Gaming. As you might have guessed from the title, this game is a sequel to the smash-hit slot Cazino Zeppelin. This time around the action takes place on a spaceship instead of an airship and is set in the future as Stella the matriarch of the ship invites the Universe’s biggest high-rollers to go head-to-head against each other to see who will come out on top. Let’s join in the action to see if we can high-roll our way to a galactic fortune on the reels? 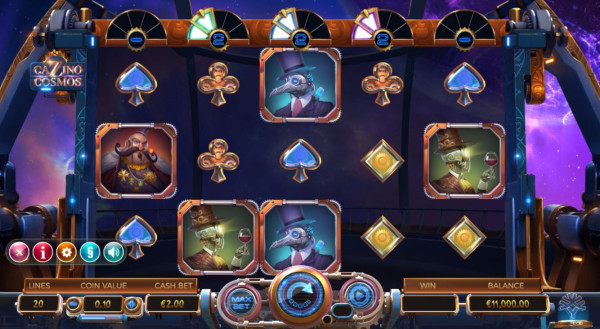 The first thing you will notice when you load up the game for the first time is that you will be greeted with a message informing you that 2 Wilds have been added to reels 2, 3, and 4. This is very important as each reel has its own collectible Wild symbol. Collect 5 Wilds on one reel and you will trigger one of the following 5 Collections Free Spins bonus features:

The main Wild symbol in this game is represented by an image of Stella. This symbol substitutes for all other regular symbols to help form winning combinations.

Cazino Cosmos also features a great Free Spins bonus game which can be triggered by landing 3 or more Scatter symbols. The Scatter symbol is depicted by an image of a gold chip with the words ‘Free Spins’ displayed inside. It goes without saying, the more Scatters you land then the more Free Spins you will receive. For example, 3, 4, or 5 Scatters awards 10, 15, or 20 Free Spins along with a nice cash prize worth 4 times your bet. During Free Spins, all Wilds that appear will become sticky and if you land at least 1 Wild on each reel then you will be awarded 5 Extra Free Spins with all Sticky Wilds remaining on the reels. We should also mention that any Wilds that appear alongside the Scatters to trigger this feature will be carried over and will become sticky to further increase your chances of landing a space-tacular fortune on the reels.

Cazino Cosmos takes place on a luxurious spaceship deep in outer space with the reels featuring cogs and mechanical wheels and a beautiful light purplish background filled with twinkling stars. The graphics as you would expect from Yggdrasil Gaming are gorgeous and evoke a futuristic steampunk space environment perfectly. Symbols consist of high-rollers including a man with a big moustache, a bird man, a robot, a cat man, along with classic heart/diamond/club/spade icons. The animations are crisp as symbols dart up and down the reels and burst into life in dramatic fashion when part of a win.

The music is atmospheric with a gentle and soaring soundtrack used. Needless to say, it complements the space theme of the game superbly.

The game has 20 paylines, a solid RTP of 96%, and an incredible maximum payout worth 11,821X your initial wager!


Our Verdict on Cazino Cosmos

Cazino Cosmos comes from top software provider Yggdrasil Gaming and its one space casino we thoroughly enjoyed visiting! Unlike most sequels, this slot is a more than worthy successor and in fact better than the original. It features fantastic visuals, thrilling gameplay, and a tonne of highly entertaining bonus features. The Free Spins bonus round took a bit of time to trigger but can be quite lucrative with lots of Sticky Wilds and Extra Spins up for grabs but the most profitable feature by far is the Collections Free Spins. Here, you can benefit from a slew of rewarding features such as Double Stacked Wilds, Extra Free Spins, Random wilds, as well as Nudging Reels. We should also highlight that the top prize for this slot is a spectacular 11,821X your bet! Variance-wise, this slot is High so is suited to players who have plenty of bankroll on hand. For slots with a similar Steampunk theme, check out Fortunium and Temperance.

For one of the best games this side of the Milky Way then play Cazino Cosmos!