The Shadow Order from Push Gaming: Slot Review - a secret society worth joining!

Team up with a secret society to gain access to a host of powerful secrets in this superb slot from Push Gaming!
casino game review push gaming slots the shadow order

Enter the innermost circles of an ancient organisation, hidden beneath the surface of modern society in this exciting new release from Push Gaming! The name of the organisation in question is The Shadow Order. It is said that special members of this top-secret society have an uncanny way of predicting seemingly random coincidences. So if you are a fan of the Da Vinci Code and know all about the Illuminati then this slot should be right up your alley! Read on to see how we fare as we join The Shadow Order to see what kind of mysterious secrets await us on the reels in this game?

The Shadow Order is played on a 5x5 grid and includes Cascading Reels, Sticky Wilds, Upgraded Symbols, and Free Spins. 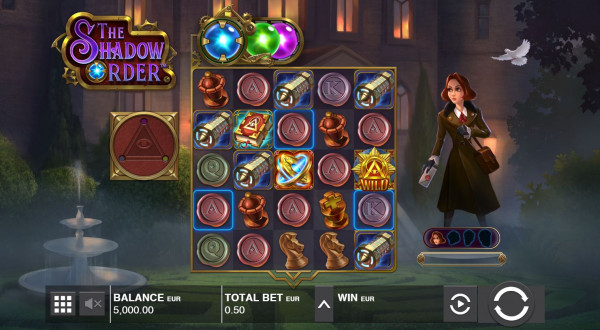 Top Casinos for The Shadow Order

The first feature to talk about is that this game is a Cluster Pays slot. This means that in order to form a win on the reels then you will need to match 3 or more adjacent symbols either horizontally or vertically. Whenever you do form a win then all winning symbols will be removed from the grid and are then replaced with new symbols from above. The process continues until no more winning combinations occur on the reels. This is known as the Cascade feature.

The Shadow Order features a range of symbols all related to the secret society. These include Chess Pieces, Cylinders, Wax Seals, and a pair of Intertwined Coins. Keep an eye out on the latter as it pays out a decent 120X your bet for landing 5 together.

The Wild symbol in the game is depicted by an image of The Shadow Order’s emblem. Similar to most Wilds, it substitutes for all other symbols apart from the Orb symbols to help form winning combinations on the grid. It is also the most valuable symbol in the game as if you are lucky enough to land 5 on the same spin then you will be awarded a nice cash prize worth 300X your wager!

Above the grid, you will notice 3 different coloured Orbs. These Orbs will drop down onto the reels when you have fully charged them up. You do this by hitting a certain number of winning cascades. Orb symbols that appear on the grid will then act as Wilds and will proceed to roll downwards and to the right. In the game, you will notice that there are 3 special Hotspots highlighted by bright blue frames which appear on the grid just behind the symbols. If an orb lands in one of these Hotspots then you will trigger one of the following bonus features:

To add even more excitement, there are 4 characters in the game that each come with their own special bonus features. You will start off with the default character Molly the Messenger who grants players the power to charge the orbs in order to let them fall onto the grid. To unlock the other 3 characters, you will need to land Ring symbols which will fill up a special meter. The other 3 characters offer the following extras which can trigger randomly on any base game spin:

The final feature to discuss is the Free Games Bonus Game. This triggers when all of the 3 orbs reach the right corner at the bottom of the grid. Once activated, you will receive 5 Free Spins and any orb that now appears on the grid will become sticky. Orbs can also be extremely lucrative here as they grant expanding multipliers that can reach a high of 30X!

More Bonuses for The Shadow Order

The game is a visual masterpiece as it features highly polished 3D graphics. It takes place in front of a large mansion surrounded by trees and a water fountain and is played on a unique chessboard. Symbols in the game are wonderfully rendered onscreen and consist of Intertwined Coins, Emblems, Wax Seals, Cylinders, and Books. The animations are superb as well as symbols plop onto the grid and then disappear just as quick whenever you land a winning combination. It is also pleasing there are 4 characters that can appear beside the grid to grant you additional bonuses and extras. It really adds to the exciting gameplay.

The music features a mysterious and suspenseful soundtrack that plays ominously in the background. It complements the Secret Society theme perfectly.


Our Verdict on The Shadow Order

This game comes from Push Gaming and is definitely one secret organisation worth signing up for! It is visually stunning to look at and is jam-packed with lots of lucrative bonus features. Although it is a wee bit baffling to play at first with so many moving parts to contend with, once you get the hang of it then there is a whole lot of fun to be had here. The various bonus features can be quite tricky to trigger but found the Orb of Preservation feature quite lucrative as it grants a cascade with all high-paying symbols held in place. The standout feature of the game is Free Spins as it is here where you can benefit greatly from expanding multipliers that can reach an incredible high of 30X! It is also here where you can bag the top prize which is a mouth-watering 24,202X your bet! I also like how you can unlock characters along the way to add even more bonuses into the mix. Variance-wise, it is extremely High so make sure to have plenty of bankroll on hand before joining this secret organisation! Fancy cracking even more codes and secrets? Then check out Holmes and the Stolen Stones and Rich Wilde and the Tome of Madness.

Work covertly with a secret organisation to win big on the reels when you join The Shadow Order!