Rich Wilde and the Tome of Madness from Play'n GO: Slot Review - Rich Wilde is back!

It’s time to join everybody’s favourite hero on a whole new adventure in this new game from award-winning software studio Play’n GO! The last time we checked in on Rich Wilde, he was busy combing the pyramids of Egypt in search of the fabled Book of Dead. This time around in this much-anticipated sequel, Rich Wilde has got his hands on the legendary Tome of Madness, which is said to unlock a portal to a dark dimension where a giant sea monster known as the Cthulhu lives! According to legend, those who gaze upon this monstrous creature lose their minds in an instant. Let’s join Rich Wilde as he tries to unlock the secrets of the Cult of Cthulhu and hopefully bag ourselves a nice cash prize for doing so!

Rich Wilde and the Tome of Madness is played on a 5x5 grid and comes with Cascading Reels, Special Wilds, Mega Wilds, and Portal Effects. 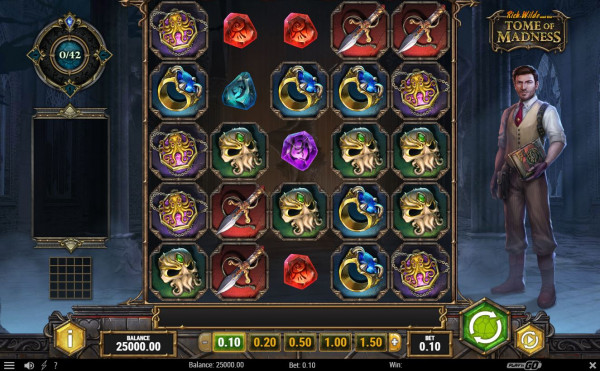 Top Casinos for Rich Wilde and the Tome of Madness

More Top Casinos for Rich Wilde and the Tome of Madness

Rich Wilde and the Tome of Madness is a cluster pays slot where wins are formed by landing 4 or more identical symbols in a cluster either horizontally or vertically on the reels. Whenever you form on a win on the reels in this game then the winning symbols will disappear to be replaced by new symbols from above. This gives you the potential to keep on landing wins one after the other provided the reels are kind to you of course. On the grid, you will notice a portal to the left of the reels which charges up for every win you create and this is used to unlock several bonus features in the game.

Symbols in the game consist of Skulls, Daggers, Rings, and an Octopus Medallion. Keep a close eye on the latter as it is the most valuable symbol in the game. Land a cluster of 10 or more Octopus Medallion symbols and you’ll receive a fine cash payout worth 100X your wager.

As you play the game, watch out for Eye Marks as they are special positions which appear randomly and if you form a win in these positions then 2 Special Wilds will be added to the grid for the next non-winning cascade. There is also a bunch of other Wilds in the game consisting of a Special Wild, a Multiplier Wild, and a Mega Wild. These Wilds replace all regular symbols to help create wins on the grid. The Multiplier Wild as you might expect doubles all winnings.

During the Other World Free Round feature, up to 12 Eye Markers will now appear on the grid. To open an eye, all you have to do is form a win in that eye’s position. If you manage to open up all of the eyes then the Mega Wild Cthulu symbol will be added to the grid. This is a colossal Wild symbol that continues to move one step at a time with each cascade to further enhance your chances of winning on every spin.

Best Welcome Bonus for Rich Wilde and the Tome of Madness

More Bonuses for Rich Wilde and the Tome of Madness

In terms of graphics, this is the best looking online slot by some distance that Rich Wilde has ever starred in! The action takes place in front of a derelict church with Rich Wilde standing next to the right of reels as he clutches on to the Tome of Madness. Symbols in the game are wonderfully designed and are comprised of Daggers, Skulls, Rings, Medallions, along with a bunch of coloured stones. The animations are a real visual treat as symbols drop down on the grid with a big thud and then disappear rapidly when part of a winning cluster. A particular highlight is when you trigger the Other World Free Round as the action moves from the church to a dark mystical setting where bright yellow flames illuminate the background. It really adds to the fast-paced gameplay.

The music is atmospheric and spine-tingling with an ominous backing track playing in the background. It complements the Horror theme of the game perfectly.


Our Verdict on Rich Wilde and the Tome of Madness

Leading software studio Play’n GO produced this game and we are happy to say it is a more than worthy addition to the ever-popular Rich Wilde series. It is definitely darker in tone than previous games we must admit but refreshing to see nonetheless. Although confusing at first to get to grips with, it is surprisingly easy to get the hang of after a few spins. The key to winning big here is to form a few cascading wins with added Portal Effects. The most rewarding feature by far is the Other World Free Round as you can benefit from up to 7 Portal Effects as well as have the opportunity to unleash the highly lucrative Mega Wild Cthulhu symbol on the grid. In terms of variance, I found this slot to be High so make sure to have lots of bankroll on hand before joining Rich Wilde on his latest adventure! For slots with a similar Horror theme, check out Devil’s Number and Wolf Hunters.

Unlock the secrets of the Cult of Cthulhu to win big on the reels in Rich Wilde and the Tome of Madness!