Fat Santa from Push Gaming: Slot Review - generous wins are what Christmas is all about!

December is finally here so it’s time to gear up for a slew of Christmas themed games from all the top software providers. This new release from Push Gaming focuses on a rather portly Santa Claus as he struggles to fit down the chimneys to leave Christmas presents for everyone. Fat Santa is quite similar in style and features to the hugely popular slot Fat Rabbit, except this time around it does not take place on a farm but in the North Pole as Santa readies himself for the almost impossible task of delivering gifts to everyone all in one night. Let’s join Santa on his sleigh to see what cash prizes he might share with us along the way?

Fat Santa is a 5 reel slot with 50 paylines that includes Expanding Wilds, Free Games, a Santa’s Sleigh Bonus Feature, and a Buy Feature. 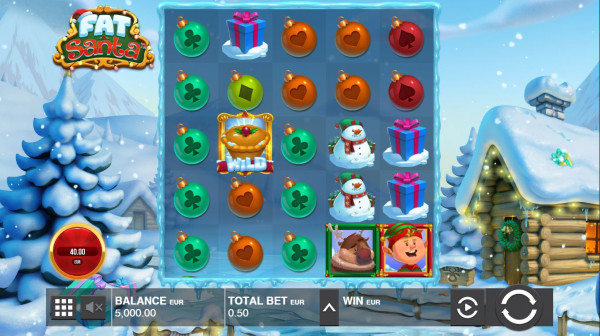 The first feature to highlight is the obligatory Wild symbol which is represented by an image of Fat Santa. This symbol substitutes for all other symbols to help form winning combos on the reels and along with the Elf symbol is one of the highest paying symbols in the game. Land 5 of these symbols on an active payline and you will be celebrating Christmas big time with a nice cash payout worth 20 times your stake!

As you play the game, Santa’s sleigh may appear on the reels and when it does then it will leave Christmas Pie symbols in random positions that lock in place. These symbols act as Wilds with any symbol landing beneath them also being replaced by Christmas Pie symbols. This is known as Santa’s Sleigh feature.

When a Fat Santa symbol lands with one or more Wild Christmas Pie symbols anywhere on the reels then you will trigger the Free Games feature. In this fun bonus game, you will be given 5 Free Spins and a Pie Meter will appear to the right of the reels. When a Christmas Pie symbol appears then Fat Santa will move towards it and eat it to fill up the Pie Meter one pie at a time. The more pies Fat Santa eats then the bigger his symbol becomes. Incredibly, this symbol can grow to become a colossal 5x5 symbol on the reels! Each time that Fat Santa grows, you will also receive 3 additional Spins.

If you don’t fancy waiting around to activate the Free Games feature then you can press the Buy Feature button to trigger it immediately. This button is located on the bottom lefthand corner of the screen. Be warned though that it costs 80X your current bet amount in order to use this feature.

The graphics are bright and cartoonish that evoke a wonderful festive atmosphere as it takes place in the North Pole with small log cabins and snow falling slowly on the screen. Symbols are nicely designed and consist of Fat Santa, an Elf, a Reindeer, a Snowman, a Gift Box, and a set of different coloured baubles. The animations are excellent as symbols blink, rotate, and enlarge when part of a winning payline. In particular, I really like when you trigger the Free Games feature how the game switches to the inside of one of the log cabins so that Fat Santa can eat all those pies in peace!

The music is light and bouncy that really gets you in the holiday spirit. It ties in really well with the Christmas theme of the slot.


Our Verdict on Fat Santa

This game is made by top software developer Push Gaming and is a very fun and entertaining Christmas slot. It features beautiful cartoonish graphics, exciting gameplay, as well as a sleigh full of Bonus Features! The Santa Sleigh feature triggered quite frequently to leave plenty of Wilds on the reels although it took a bit of time to activate the Free Games feature, to be honest. It is definitely worth sticking around for as it is the most rewarding feature in the game, offering the chance to turn Fat Santa into a colossal 5x5 Wild symbol with plenty of Extra Spins on top of that! Variance-wise, I found this slot to be Medium so thankfully you won’t be waiting too long for Santa to award you a nice cash prize! For slots with a similar Christmas theme, check out Ho Ho Tower and Jingle Jingle.

Celebrate Christmas with lots of pies and a plenty lot of cash prizes when you play Fat Santa!