Humpty Dumpty from Push Gaming: Slot Review - fall into a lot of luck!

Save the day, climb the wall, and stop Humpty Dumpty from having a big fall!
casino game review humpty dumpty push gaming slots

Humpty Dumpty is a famous and very short English nursery rhyme that’s all about an egg who has a nasty fall from a wall and unfortunately smashes into pieces. The rhyme is one of the best known in the English language and dates back to as far as the late 18th century. Humpty Dumpty is set during medieval times as when poor Humpty plummets from the wall, all of the king’s horses and men try to desperately put him back together again. This popular rhyme is usually accompanied by a melody and to this day I still remember the lyrics! Leading software developer Push Gaming decided to release a slot based on this famous rhyme. Let’s find out if it is a smash hit or a rotten egg? 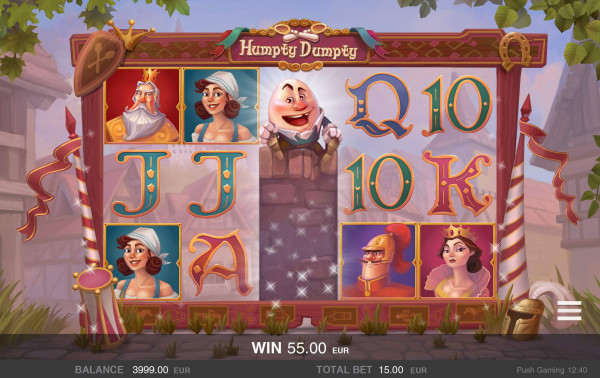 The first feature to mention is the Wild symbol. This symbol is represented by a pair of spoons with a golden background. Similar to most Wild symbols, the main function of this symbol is to substitute for all other symbols except the Scatter and Bonus symbols to help form winning combinations on the reels. The Wild also comes stacked on the reels and can fill an entire reel when it appears.

When one or more Wild symbols appear on the reels then the Falling Wilds feature will activate. In this neat feature, you will be awarded a respin and the reel in which the wild lands on will move by one position which offers you a second chance at forming a win on the reels. If you land more Wilds then you will trigger additional respins. This feature ends when no more Wilds appear on screen.

The Scatter symbol is illustrated by an image of Humpty Dumpty and when this symbol displays fully on the middle reel, the Free Spins feature will trigger and award 6 Free Spins. While in this feature, a heart-shaped bonus symbol will appear on reels 2, 3, and 4. Collect 3 of these symbols on the same reel and the reel will transform into a stacked wild and will remain sticky for the rest of the feature. You can keep an eye on how many bonus symbols you have collected by looking at the meter located above each reel. The Falling Wilds feature can also be triggered during Free Spins.

The game features an array of charming colourful graphics and takes place in a quaint medieval town with a large castle looming in the distance. Symbols are nicely detailed and consist of a King, a Queen, a Soldier, a Horse, a Maid, and the standard A -10 icons. The animations are a real visual treat as symbols zip up and down the reels in furious fashion and highlight with a nice golden frame when part of a winning combination.

The music is of a jaunty and playful nature and fits in really well with the fairy tale theme of the game.


Our Verdict on Humpty Dumpty

Push Gaming created this extremely fun slot and it’s a fine adaptation of a much-loved nursery rhyme. The presentation of the game is fantastic and there is a nice varied range of bonus features to keep players entertained for hours on end. The Falling Wilds feature can be quite lucrative especially when you land a few Wilds in a row. However, the standout feature of the game is of course the Free Spins bonus game as this offers players the potential to land some huge payouts thanks to fully stacked Wild Reels. I found this game to be of Medium variance so you won’t be waiting too long until you land a decent enough payout on the reels. For slots with a similar Fairytale theme, check out Pied Piper and Fairytale Legends: Red Riding Hood.

Land an eggstraordinary payout when you play Humpty Dumpty!