The One Armed Bandit from Yggdrasil Gaming: Slot Review - buckle up your holsters!

Round up outlaws and go head-to-head with their gang leader in this excellent western-themed slot from Yggdrasil Gaming!
casino game review slots the one armed bandit yggdrasil gaming

Travel back in time to team up with a highly-skilled bounty hunter in the Wild Wild West in this new release from stellar software provider Yggdrasil Gaming. The lawless town that he once called home is now packed full of gun-toting desperados who are more than eager to test just how good his quick-draw really is. The name of this game is rather clever as it is also the term used for old physical slot machines of the past. Without further ado, let’s join the newly deputised sheriff as he goes about taking down the bad guys which hopefully leads us to lots of cash prizes along the way,

The One Armed Bandit is a 5 reel slot game with 20 paylines that includes Wild Symbols, Increasing Multipliers, Respins, and Free Spins. 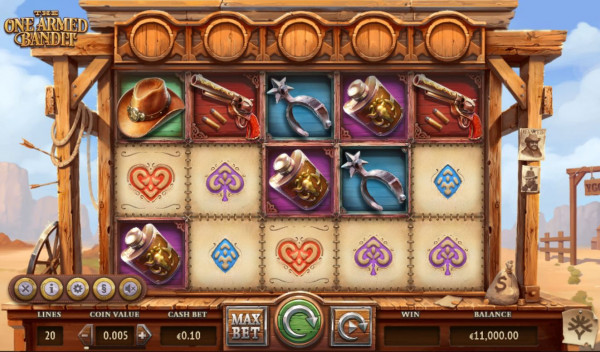 Top Casinos for The One Armed Bandit

More Top Casinos for The One Armed Bandit

The One Armed Bandit comes with a range of high-value symbols related to the Wild Wild West. These include Guns, Flasks, Cowboy Hats, Spurs, and classic Hearts/Diamonds/Spades/Clubs icons. The most valuable symbol in the game is the Gun as if you happen to land 5 of these on an active payline then you will be leaving the Wild Wild West with a fine payout worth 80X your bet in your pocket! An image of a Sheriff’s badge is the Wild symbol in the game. The main function of this symbol is to replace all other regular symbols apart from the Scatter when part of a winning combination.

The Scatter symbol is represented by one of the bandits. When this symbol appears on the reels then you will trigger the Respin feature. The Scatter will then proceed to change into a Wild symbol and award a Respin with Wilds on the reel where the Scatter landed. During respins, special 5X Multiplier Wilds may appear and when they are part of a win then your win will be boosted by a nice 5X multiplier. A pleasing aspect of this feature is that Respins keep on occurring until no more new Scatters appear on the reels.

The One Armed Bandit also comes with a Free Spins bonus round. To trigger it, you will need to land a Scatter symbol on all 5 reels. Once in, you will be awarded 10 Free Spins with a 5X Multiplier and any Respins which were not used before triggering Free Spins are converted into Extra Free Spins. Every second Scatter symbol you land during this feature will increase the multiplier by 1. It is actually possible to increase it all the way up to 20X! A special bonus symbol also pops up on the reels during this feature and when it does then you will be awarded an additional Free Spin. Land 2 Bonus symbols and you will be given a 10X multiplier and if you land 2 more then you will activate the highly lucrative 20X multiplier!

Best Welcome Bonus for The One Armed Bandit

More Bonuses for The One Armed Bandit

Visually, this game is just wonderful to look at as the action takes place inside a dusty town somewhere in the Wild Wild West with tall looming canyons in the background and a bright clear sky overhead. Symbols in the game are beautifully crafted and consist of Hats, Spurs, Guns, Flasks, along with classic Hearts/Diamonds/Spades/Clubs playing card icons. The animations are smooth as symbols move down the reels quickly and enlarge and move about when part of a winning combination. It is particularly exciting whenever you trigger the Free Spins feature as the action moves to inside the actual town as seen in the background of the base game.

The music is atmospheric with a Western-inspired soundtrack used. Needless to say, it fits in really well with the Wild Wild West theme of the game.


Our Verdict on The One Armed Bandit

Top software provider Yggdrasil Gaming produced this wonderfully designed slot and to be honest, it is one of the best Western-themed slots we’ve come across in quite some time. Featuring outstanding graphics, exciting gameplay, as well as a slew of excellent bonus feature, it’s one slot we thoroughly enjoyed playing. Features-wise, the 5X multiplier Wilds can really boost your wins but this game is all about the Free Spins feature as not only can you claim extra Free Spins but also have a massive 20X multiplier in play! The top prize for this game is a gigantic 11,800X your wager which can be won when having the maximum multiplier active on the reels. Variance-wise, this slot is very High so make sure to bring plenty of bankroll with you before taking down the bad guys here! For slots with a similar Western theme, check out Golden Colts and Wild Wild West.

Take down a bunch of no good criminals to win more than a fistful of cash prizes in The One Armed Bandit!