Prepare to visit a strange food emporium that’s run by a mighty Emperor Penguin and his bunch of penguin slaves in this brand new game from acclaimed software studio Yggdrasil Gaming. Unfortunately, the penguins in this game are not as stealthy or savvy as the ones seen in the popular movie franchise Madagascar so it is up to you to help these flightless fellows escape Penguin City from the clutches of the dastardly Emperor Penguin. Let’s see if we can help these poor little penguins out and just remember when playing this online slot that the more penguins you help escape then the bigger the cash payouts become!

Penguin City is a 5 reel slot game with 243 Win all Ways that includes Sticky Wilds, Stacked Wilds, and a Penguin Escape Mode. 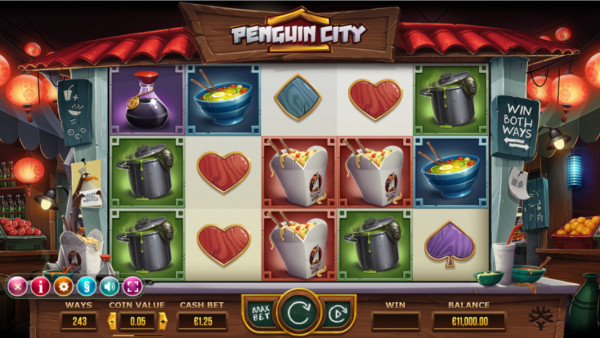 The first special feature to highlight is that this game does not feature a conventional payline structure, instead, it features 243 Win All Ways. This essentially means that wins are formed when any combination of 3 or more matching symbols on subsequent reels from the left or right awards a win. The fact that you can win from both ways should really increase your chances of helping those penguins escape by some margin.

The Wild symbol in this slot is illustrated by the word ‘Wild’ with a dark red background. Similar to most Wild symbols, this symbol substitutes for all other symbols except the Emperor Penguin symbol to help create winning combinations. This symbol only appears on reels 2 and 4 in the game. When the Wild is part of a win on the reels then it will lock into place and become sticky for the next spin and will also trigger the Penguin Escape Mode feature.

In the fun Penguin Escape Mode bonus feature, you will be taken to a new screen where your job is to help as many penguins escape as possible. If the penguins jump on the reels then you will receive either a Sticky Wild on reel 2 or 4 on winning spins or 1 symbol will be swapped on reel 3 to form a win on non-winning spins. This means that you can keep getting respins again and again until you can’t create any more winning combos on the reels. A Stacked Wild symbol displaying the Emperor Penguin also shows up on reel 3 in this bonus game and when he appears on the reels then you are guaranteed a cash payout. This special symbol is a Walking Wild which means that it moves down 1 row on every spin until he reaches the final row and then exits from the reels. The penguins dare not escape when the Emperor Penguin shows up!

The presentation of this game is second to none as it features outstanding 3D visuals and what we have come to expect from leading games studio Yggdrasil Gaming. This slot takes place in a busy Asian-style restaurant with hot steaming bowls of soup on opposite sides of the reels, glowing lanterns gently swaying from side to side, and busy penguins shuffling up and down. Symbols are superbly designed and consist of Boiling Pots, Takeaway Boxes, Meat Cleavers, Soup Bowls, Soy Sauce Bottles, and the standard Heart/Diamond/Spade/Club icons. The animations are visually stunning as penguins march about as you play the game and I like how the Wild symbol triggers a flame effect when it is part of a winning combination on the reels. A special mention goes to the Penguin Escape Mode where you are treated to all kinds of spectacular animations and effects as you watch the penguins jump their way to freedom!

The music in this slot is backed by a gentle and relaxing oriental-style soundtrack. It ties in nicely with the theme of the game.


Our Verdict on Penguin City

Penguin City is made by leading software provider Yggdrasil Gaming and it’s one food emporium definitely worth a visit! This game like most Yggdrasil games features exceptional graphics and a very wacky theme that’s sure to attract many players to give this slot a shot. The bonus features although not many can be highly rewarding especially if you land lots of respins in the excellent Penguin Escape Mode. Also, be sure to keep an eye out for the Stacked Emperor Wild symbol as when he pops up on the reels then you are guaranteed a big win. The only downside to this slot is that unfortunately, it does not offer any Free Spins. Variance-wise, I found this slot to be Medium so you will win cash payouts on a regular basis but just don’t expect them to be massive. For slots with a similar cute animal theme, check out Wolf Cub and Balloonies Farm.

Let the penguins spread their wings to rack up big wins when you play Penguin City!