Take a trip to a farm where the animals are made up entirely of balloons!
balloonies farm casino game review igt slots

This game is a direct sequel to the smash hit slot Balloonies that was released by IGT back in 2014. The first game focused on a cute set of animals that are high-flying balloons and featured wild animals such as monkeys, elephants, and giraffes. Thankfully, the sequel focuses on less exotic animals as it is set on a farmyard so expect to see slightly more familiar animals such as pigs, sheep, and cows this time around!

Balloonies Farm is a 5 reel slot game with 20 paylines that includes Free Spins, Floating Reels, and a Star Multiplier feature. 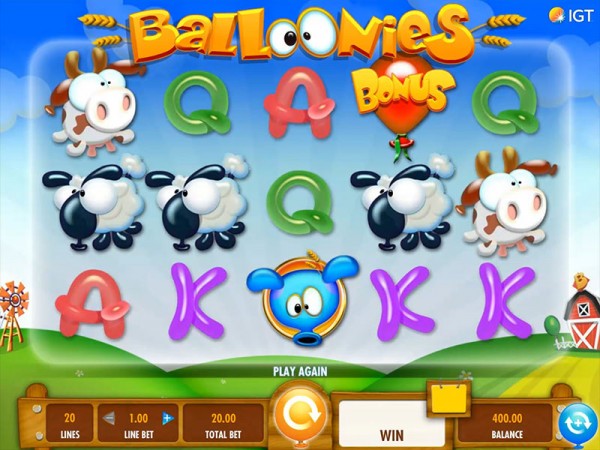 The first thing to highlight about this game is that it features Floating Reels. Rather than just spinning reels like in most other slots, the symbols disappear on the reels in this game and will float upwards when you land a win. The empty spaces are filled with new symbols which float up from below. It is visually stunning to look at and provides ample opportunity to get winning combinations time and time again from each spin.

The Wild symbol is illustrated by a golden star and it substitutes for all other symbols apart from the Bonus symbol. Any Wild symbol that is part of a winning combination awards you with a nice multiplier ranging from 2X to 5X. The only downside of this symbol is that it only appears on reels 2, 3, and 4 in the game.

The Bonus symbol is depicted by a shiny red balloon and if you land 3 of these symbols anywhere on reels 2, 3, and 4 then you will trigger the Free Spins Bonus game. In this feature, you get to pick from 4 different colourful balloons which offer a nice range of Free Spins and multiplier prizes. They are as follows:


The Wild symbol is also active in this feature and can award even greater multipliers depending on which balloon you choose. Another nice feature of the Bonus symbol is that you will win 2 times your original wager when it is a part of a winning combination on the reels.

The graphics are absolutely fantastic as the game is set on a very colourful and vibrant farmyard with a range of farm animals made from balloons of all shapes and sizes. The backdrop of the game is a clear blue sky with some green hills and a windmill and farmhouse in the distance. Symbols consist of a variety of extremely cute farmyard animals including cows, sheep, and pigs.The animations are excellent as symbols magically float up on screen and pop just like balloons when you land a win on the floating reels.

The music is very country-based as you can imagine and filled with lots of banjo sounds. It suits the game perfectly.


Our Verdict on Balloonies Farm

Balloonies Farm is produced by IGT and it's a highly enjoyable slot to play. The game is gorgeous to look at, has a unique theme and is a worthy successor to the original Balloonies game. The Free Spins feature offers plenty of entertainment and some highly lucrative payouts especially when you go for the higher multipliers rather than more free spins. The only downside of Free Spins is that it is not possible to retrigger them. I found this game to be of Medium variance so there is always a good chance you will win a decent cash payout when you play this game.

Time to make some hay in Balloonies Farm!