Pixies of the Forest II from IGT: Slot Review - experience the magic of winning!

Return to the magic and wonder of an enchanted forest inhabited by pixies in this new release from IGT. This slot as you can tell from the title is a direct follow-up to the smash-hit IGT game Pixies of the Forest. This time around, the Pixie Queen herself has joined the original troupe of pixies from the first game to help you discover a whole new trove of secret treasures in the magical forest. Join us as we step foot inside this enchanted woodland setting to see if we can unearth ourselves a whole load of hidden riches in this slot?

Pixies of the Forest II is a 5 reel slot with 99 paylines that includes Free Spins, Cascading Reels, Sticky Wilds, Wild Reels, and a Progressive Jackpot. 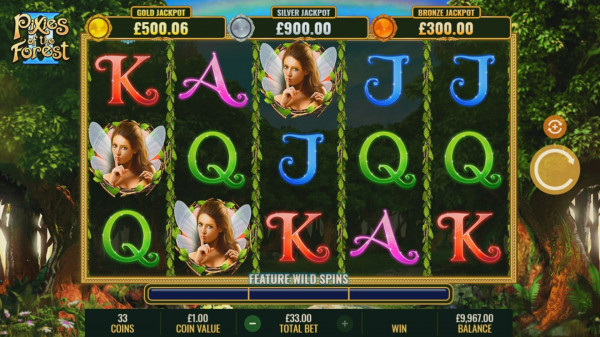 Top Casinos for Pixies of the Forest II

More Top Casinos for Pixies of the Forest II

The first feature to highlight is that this game much like the original slot features the popular tumbling reels mechanic. This means that when you form a winning combination on the reels then the winning symbols will disappear to be replaced by symbols that tumble from above. It is a highly rewarding feature as it gives you the opportunity to keep on landing wins one after the other, provided that the reels are kind enough to you of course!

The Wild symbol in this slot is represented by an image of the word ‘Wild’ in bright blue font. Like traditional Wild symbols, its main job is to substitute for all other symbols apart from the Bonus and Jackpot symbols to help form winning combinations in the game. It only appears on reels 2, 3, and 4 in the main game.

As you play the game you will notice a bright blue Spirit Meter just below the reels. This increases by one for every winning tumble up to a maximum of 5. Manage to fill the meter with 3 or more Spirits and you will activate the Feature Wilds bonus feature. 1 Features Wilds spin is awarded for the first 3 Spirits, plus 1 Features Wilds spin for every extra Spirit you collect. Once triggered, one of the following 3 Feature Wilds is chosen for the next spin:

The Bonus symbol in this slot is illustrated by an image of the Pixie Queen and if you land 3 of these symbols anywhere on reels 1, 2, and 3 then you will trigger the Pixie Queen’s Free Spin Bonus feature. This feature can also be triggered by the Mystery Bonus Trigger feature as highlighted above. Once activated, you will get to pick one of the Bonus symbols to reveal how many Free Spins you will play with. The Free Spins range from 5 to 11 in total. In this exciting bonus feature, the reels are made that bit more lucrative with more Wilds added to the first reel. Also, all Pixie symbols on the first reel now pay double when part of a win. This is referred to as the Pixie Queen’s Multiplier feature. It is also possible to trigger the Feature Wilds feature here which is increased to 18 now and Feature Wilds do not decrease the remaining Free Spins either. We should also mention that all winning combinations in this feature must include at least one non-Wild symbol and it is possible to land up to 180 Free Spins here.

During normal bonus spins, if a spin does not activate a Features Wild spin then the Pixie Queen may trigger enough tumbles to initiate it. This is called the Pixie Queen’s Gift feature. There are 3 different types of gifts that may be awarded and they are:

The final feature to discuss is the Pixie Progressive Picker feature. This is triggered by landing 3 Jackpot symbols on reels 3, 4, and 5 or by accessing it via the Mystery Jackpot Trigger feature. In this feature, you get to pick a Pixie to fill one orb of the Gold, Silver, or Bronze Jackpot meter. Once the corresponding Jackpot meter is filled then you will win that respective Jackpot Prize total. The Bronze and Silver jackpots are a fixed award with the Gold Jackpot being the most lucrative as it is a shared progressive jackpot.

Best Welcome Bonus for Pixies of the Forest II

More Bonuses for Pixies of the Forest II

The presentation of the game is visually stunning as the fairies have been given a whole new makeover and look vastly different than their dated counterparts seen in the original Pixies of the Forest. The game takes place in a lush green forest teeming with magic, hidden treasures, and a whole bunch of pixies of course! Symbols are beautifully designed and consist of the 3 original Pixies along with the new Pixie Queen as well as standard A- J icons. The animations are slick as symbols disappear in a puff of magical smoke when part of a winning combination and are highlighted by a nice bright blue frame as well. It is particularly satisfying when a Pixie is part of a win on the reels as they flutter their wings elegantly onscreen.

The music is upbeat with lots of forest-like sounds including birds chirruping away in the background. It complements the Fairy theme of the game superbly.


Our Verdict on Pixies of the Forest II

This slot is made by IGT and we are happy to report is a more than worthy sequel to the classic Pixies of the Forest slot. It is quite similar to the original to be fair but with much-improved graphics and a whole lot more bonus features on top of that. The tumbling reels mechanic is, as usual, an excellent feature here and it’s pleasing to see that this slot features 3 Progressive Jackpots as well. The standout attraction of this slot is the Pixie Queen’s Free Spin Bonus feature as you can enjoy a myriad of bonus features here including increased Feature Wilds and Double Wins when Pixie symbols are part of a win on the reels. The top prize for this slot is a superb 2,000X your wager which can be won in the Free Spins bonus game. When it comes to variance, I found this slot to be Medium so you will find that wins are evenly distributed the more you spin those reels. For slots with a similar Fairy theme, check out Faerie Spells and Spin Dizzy.

Seek out the Pixie Queen to win big on the reels when you play Pixies of the Forest II!