Dwarf Mine from Yggdrasil Gaming: Slot Review - an underground full of surprises!

Drill, dig, and mine your way to lots of crystals, gold, and buried treasure when you enter the Dwarf Mine!
casino game review dwarf mine slots yggdrasil gaming

Head deep underground to a mine filled with lots of hidden treasure in this new title from top software provider Yggdrasil Gaming. This game focuses on a large but cheery dwarf who has a rather unconventional way of mining for crystals. He does away with your standard pick-axes and shovels and instead uses a special digging machine called a Dwarven Digger. This wonderful invention actually expands when the dwarf collects special crystals to gobble up even more ground when mining! Let’s start the machine up with the dwarf by our side and see what golden treasure we can find in this game?

Dwarf Mine is a 5 reel slot game with 1,024 ways to win that includes Expanding Reels, Multipliers, and Free Spins. 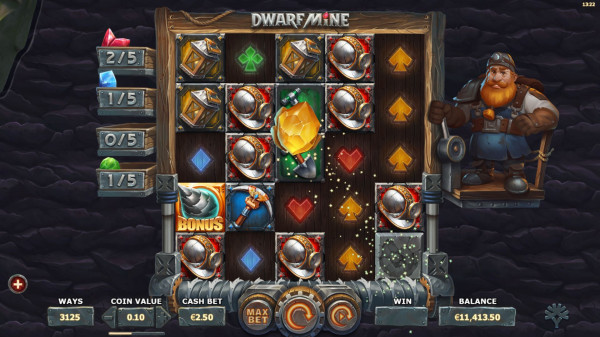 Top Casinos for Dwarf Mine

More Top Casinos for Dwarf Mine

The first feature to highlight is that this game comes with a massive 1,024 ways to win! To form a win on the reels in this game, you will need to land the same symbol on at least 3 consecutive reels from the left. If more than 1 symbol on one reel appears then you will be treated to a nice multiplier prize.

The Bonus symbol in this game is represented by an image of a big drill which presumably is a part of the Dwarven Digger. It only appears on reels 1, 3, and 5 in the main game. Keep a very close eye on this symbol as when it appears on the reels then it will expand the reels by 1 row. This, in turn, increases the number of ways to win. The reels can be expanded up to a maximum of 3 times to give you up to a staggering 16,807 ways to win! This is referred to as the Expanding Reels feature. With the potential of having thousands of ways of creating wins on the reels, you will be mining yourself to a fortune in no time at all!

To trigger the Free Spins bonus round, you will need to land 3 Bonus symbols on reels 1, 3, and 5 on the same spin. Once activated, you will be awarded 10 Free Spins which are played on an expanded 5x7 reel structure.

When you expand the rows in the main game using the Bonus symbol, you'll be able to collect special crystals. Each collectible crystal can only land once per spin and are awarded in the following order: green, yellow, blue, and red. Manage to collect 5 of the same crystal then you will trigger the Collection Free Spins feature. In this additional Free Spins game, you'll receive 5 Free Spins to use on a 5x7 reel set with only special Super High Paying symbols (Red/Blue/Yellow/Green Gems) appearing on the reels. It’s possible to rack up some huge payouts here if you land a few wins in this highly lucrative feature.

Best Welcome Bonus for Dwarf Mine

More Bonuses for Dwarf Mine

The graphics are superb as you might expect with this being a Yggdrasil Gaming slot after all. The game takes place deep inside a dark mine with the dwarf miner on the right-hand side of the reels controlling the Dwarven Digger along with a bunch of carts displaying collectible crystals on the left. Symbols are nicely detailed and consist of a Drill, a Miner Helmet, a Pick-Axe, a Shovel, a Lantern, as well as classic Heart/Diamond/Spade/Club icons. The animations are impressive as symbols fly up and down the reels and shine brightly when part of a winning combination. It is particularly pleasing whenever you land a Bonus symbol on the reels as the Dwarven Digger expands the reels and zooms out to give you even more ways to create wins.

The music is atmospheric with a soaring soundtrack playing in the background. It ties in really well with the fast-paced nature of the game.


Our Verdict on Dwarf Mine

Renowned software provider Yggdrasil Gaming created this game and we are happy to report that it's one of the best mining themed slots we’ve come across in quite some time. Granted, there are numerous mining based games out there right now but this game stands out from the rest as it features outstanding visuals, excellent bonus features, and most important of all exciting gameplay. It’s just great that you can get multipliers whenever more than 1 symbol appears on each reel and this can be very lucrative especially when they appear in the Free Spins features. Collecting crystals in this slot adds an extra layer to the gameplay and lets you see visually when you are close to triggering the Collection Free Spins bonus feature. It’s also amazing that you can increase the ways to win to a mind-blowing 16,807! In terms of variance, I found this slot to be Medium with a top prize of 3,904X up grabs on each Free Spin. For slots with a similar Mining theme, check out Dwarfs Gone Wild and Rocket Fellas Inc.

Discover a hoard of golden treasure far down below in Dwarf Mine!