Rocket Fellas Inc from Thunderkick: Slot Review - mine your way to a fortune!

Team up with a bunch of miners known as the Rocket Fellas as they mine and dig for gems in this fantastic online slot.
casino game review rocket fellas inc slots thunderkick

This new release from renowned software studio Thunderkick invites players to join a merry band of miners as they scour for gems and minerals deep down the surface below. It seems as though this bunch of miners are related as each one of them looks quite similar and is sporting a different coloured beard. Each Rocket Fellahas a special skill when it comes to mining. For example, the red-haired Rocket Fella is all about blowing things up and that is perhaps why he is wearing an eye-patch! Join us as we venture down below to the dangerous mine run by the Rocket Fellas where hopefully lots of cash prizes await us! 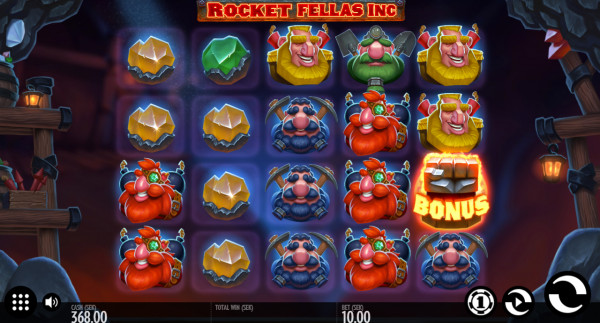 The first feature to highlight is the Wild symbol and this symbol is represented by an image of a cart full of colourful gems. This symbol substitutes for all other symbols in the game except for the Scatter to help form winning combinations. Keep a close eye on this symbol as it is the highest paying symbol in the game. Land 5 Wilds and you will bag yourself a fine payout worth 30X your stake!

As you play the game, you will notice a Rocket symbol which only appears on reel 1 in the main game and this symbol also acts as Wild when it shows up. If you manage to get a Rocket symbol and a Barrel symbol on the same row then the Barrel and any other Barrel symbols on that reel will then proceed to transform into Wilds. This is called the Rocket bonus feature.

During Free Spins, the Rocket Feature is also active but with a nice twist as any Wilds formed by the Rocket symbol will become Sticky and lock into place until the feature ends. In addition to this, there is also a Hot Reels feature where Barrels that appear on the same reel as a Sticky Wild will transform into a Wild symbol. This further enhances your chances of landing a huge win on the reels.

The game features cartoonish like graphics and takes place in a dark mine that’s surrounded by glowing lights, falling dust, and if you look closely you will even spot small gems encased in stone. Symbols are bright and colourful and consist of the 4 different Rocket Fellas, as well as a Barrel, a Rocket, along with a bunch of sparkling gemstones. The animations are excellent as symbols enlarge and sparkle nicely when part of a winning payline. In particular, I really like when the Rocket symbol appears on reel 1 and zips by the symbols on the reels to transform Barrels into Wilds. It’s a really neat visual touch.

The music is funky with a bouncy disco-style soundtrack used. It matches the fast-paced gameplay superbly.


Our Verdict on Rocket Fellas Inc

This game is made by top Swedish software provider Thunderkick and is frankly one of the best mining themed slots we have played in quite some time. Rocket Fellas Inc. features incredible graphics, a catchy soundtrack, and a superb range of bonus features to enjoy. The Rocket feature regularly triggered when playing and you can land some decent wins with it provided there are lots of Barrel symbols on the same reel. The most lucrative feature is, of course, the Bonus Game as you can benefit from Hot Reels, lots of Sticky Wilds, as well a whole heap of Extra Free Spins. Variance-wise, I found this slot to be High so it will take you a good few spins to see a profitable return on the reels and with a top prize of 7,325X your stake to aim for, this is one game not to be missed! For slots with a similar mining theme, check out Bonanza and Dwarfs Gone Wild.

Seek out hidden riches deep down below when you play Rocket Fellas Inc!