This new release from popular software studio Thunderkick invites players to join a fearsome barbarian warrior who goes by the name of Børk the Berzerker as he attempts to save his beloved from a horde of evil demons commanded by a villainous magician. Børk the Berzerker Hack n Slash Edition is an update to the original Børk the Berzerker slot machine and this revamped version now has much better graphics and added Expanding Wilds in the Bonus Game. So sharpen up your axe or mace and accompany Børk the Berzerker on an epic quest to rescue his lady and see if you can put an end to the evil magician once and for all! 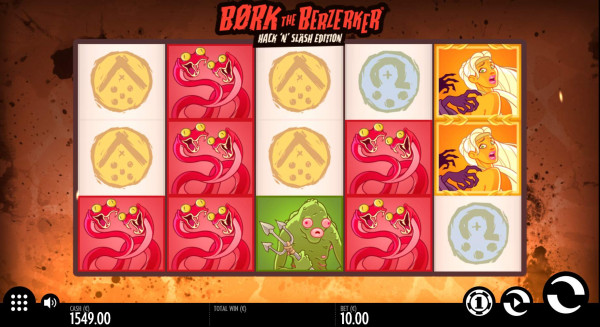 The first feature to highlight is the Wild symbol and this symbol is represented by an image of the main character Børk the Berzerker. Like most Wild symbols, it substitutes for all other symbols to help form winning combinations apart from the Bonus symbol. However, this Wild symbol is a little bit different to normal Wilds as it also expands when part of a winning payline on Reel 3 in the main game.

The Bonus symbol is denoted by an image of the evil magician. Land 3 or more of these symbols on the reels and you will trigger the Free Spins bonus game. It goes without saying, the more Bonus symbols you land then the more Free Spins you will be awarded. 3 Bonus Symbols will give you 10 Free Spins, 4 will give you 15, and if you are lucky enough to land 5 of these symbols then you will be given a nice set of 20 Free Spins. The Expanding Wild also comes into play in this feature as it will now expand on reels 2, 3, and 4 to further increase your chances of landing a big win on the reels. Land Expanding Wilds on reels 2, 3, and 4 together with stacked symbols and you will a fantastic top prize of 2,100X your total bet!

The graphics are absolutely incredible as the game features manga-style animations and plays out like a cartoon that’s suited for adults of course! The background of the slot is a charred stone wall complete with burn marks and embers flickering around the reels. Symbols are superbly designed and consist of Børk, a Magician, a Lady, a few colourful monsters, and the letters A, K, Q in Norse rune form. The animations are a joy to behold as symbols dart up and down the reels at furious pace and highlight with a really cool white glowing effect when part of a winning combination. I especially liked when the Wild symbol expands and Børk then proceeds to hack and slash his way through some demons.

The music is intense, dramatic, and a tad suspenseful. It complements the fast-paced nature of the game nicely.


Our Verdict on Børk the Berzerker Hack n Slash Edition

This game is created by Thunderkick and it’s one game that we simply can’t get enough of. The presentation of the game is second to none with lots of stylish cartoon-like graphics and is a super easy slot to play thanks to a very user-friendly design. There are not too many features in this game apart from Expanding Wilds and Free Spins but we were able to trigger both quite often. The most lucrative feature in the game is without a doubt the Free Spins feature as if you land a few Expanding Wilds on the reels then you will be treated to a fine cash payout. I found this slot to be of Medium variance so it won’t take you that long to land a win on the reels but bigger payouts might take you some time to achieve. For slots with a similar battle theme, check out Vikings go Berserk and Fire & Steel.

Defeat the magician and save your beloved to win a fortune when you play Børk the Berzerker Hack n Slash Edition!