Trolls Bridge 2 from Yggdrasil Gaming: Slot Review - the trolls are back in town!

It’s time to hang out with a bunch of mischievous trolls once more in this follow-up to the highly regarded slot Trolls Bridge! The trolls as you might expect for a sequel are bigger and badder than ever as they have become far more brazen and richer from countless travellers who dare to step foot on their bridge. They’ve become so rich in fact that they have hoarded all of their treasure inside Troll’s Temple. It’s going to take more than a few beastly battles to nab some of their riches that’s for sure! Read on to find out how we fare as we attempt to steal from the thieves themselves in this exciting sequel. 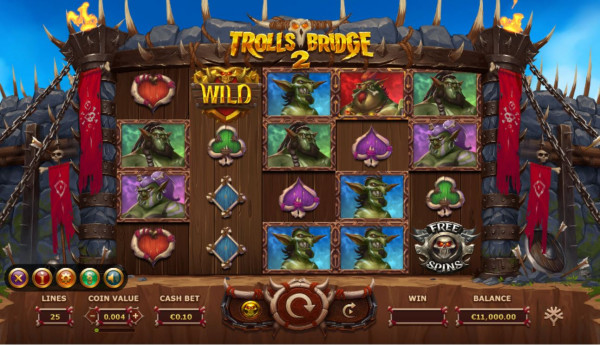 The first feature to talk about is the Golden Bet feature. This is an additional betting option that’s displayed as a gold skull next to the spin button on the reels. Turning this option costs 10 extra coins and not only does it increase the RTP from 96.1% to 96.7% and betting range to a maximum of 140.00 but also gives you an extra feature pick when you enter the special Free Spins feature.

Trolls Bridge 2 features 4 Troll characters that can appear as 2x2 or 4x4 symbols that can land on the reels at any time. The red-haired troll is the most profitable symbol to keep an eye out for here as it pays out a decent 10X your wager for landing 5 on a payline. As standard, the game comes with a Wild symbol which is illustrated by a block of wood with the word ‘Wild’ placed inside. Like most Wild symbols, it substitutes for all the highest regular winning symbols. In addition to this, there are 3 more Wilds that are feature picks in the base game (more on that below).

Then there is the Bonus Cauldron feature. This triggers when you land a Cauldron symbol on reel 5 and once activated then you will be awarded a cash prize worth between 2X to 50X your initial wager or instant access to the Free Spins bonus game.

The final feature to discuss is the Bonus Stone feature which is a random bonus event that can trigger whenever you form a winning combination on the reels. When it kicks in then a flaming boulder will appear on the reels to boost your payout with a nice multiplier ranging between 2X to 5X.

The original Trolls Bridge featured wonderful cartoon-like graphics but for the sequel, it takes a bit of dark turn as the original bridge is now covered with even more sharp spikes and skulls. The Trolls are certainly not messing around this time! Symbols in the game are vastly superior to its predecessor and appear that bit sharper and polished. They consist of 4 individual trolls as well as classic Hearts/Spades/Diamonds/Clubs icons. The animations have also been improved as symbols enlarge and shine even more dramatically when part of a winning combination. It’s especially exciting whenever a Colossal Troll appears on the reels as they smash away the other symbols and let out a big grunt to let you know that they are watching you.

The music is tense with a real dark and sinister edge to it. It complements the Fantasy theme of the game perfectly.


Our Verdict on Trolls Bridge 2

Popular software developer Yggdrasil Gaming produced this game and for once, it’s a sequel that surpasses the original in almost every single way. Featuring far superior graphics, a brooding soundtrack, along with a smashing range of excellent bonus features, it’s one bridge definitely worth crossing! The random bonus features such as the Bonus Stone and Bonus Cauldron keeps the action flowing nicely on the reels along with huge Colossal symbols that can really boost your payouts when the Trolls appear. The standout feature of the game by far is the Free Spins feature as it is here where you can enjoy a plethora of extras including 2X Multipliers, additional Free Spins, Upgraded Symbols, along with highly lucrative Colossal Wilds. The top prize on offer is a more than reasonable 2,500X your wager which is sadly lower than Trolls Bridge (4,000X your bet). Still, it is a highly entertaining slot that will provide you with countless hours of fun and entertainment. Fancy having fun with even more Trolls? Then check out Hall of the Mountain King and Hugo.

Cross the bridge if you dare for the chance to win a fortune in Trolls Bridge 2!