The Mask from NextGen Gaming: Slot Review - somebody stop him!

Join Stanley and Milo as they use a magical mask to stop an evil gangster from taking over Edge City.
casino game review nextgen gaming scientific games slots the mask

Jim Carrey has always been one of my favourite actors so I was super excited when NextGen Gaming announced they were releasing a digital slot version of The Mask to celebrate the movie’s 25th anniversary. The Mask is all about a quite and unassuming chap called Stanley Ipkiss who finds a magical mask of Norse mythology and when he puts it on all hell breaks loose as he transforms into a cartoonish and much larger than life representation of himself! Stanley is accompanied by his adorable pet dog Milo as he tries to stop a gangster from getting his hands on the mask who has his own evil designs for it. Let’s join Stanley and Milo to find out if this slot really is smoooking hot or not?

The Mask is a 5 reel slot with 20 paylines that includes Extra Wilds, Wild Reels, Wild Blocks, and Free Games. 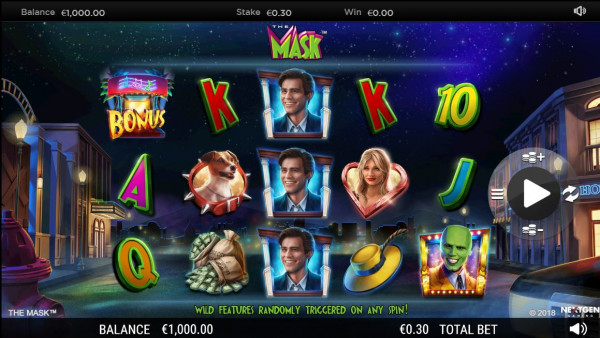 Top Casinos for The Mask

More Top Casinos for The Mask

The first feature to mention is the Wild symbol which is of course represented by an image the Mask. Like most Wilds, its main function is to substitute for all other symbols apart from the Scatter symbol to help form winning combinations. Players will also be pleased to know that wins can be formed from left to right as well as from right to left on the reels.

This game features 4 random Wild features which can occur on any spin in the main game. The first two features can trigger before a spin and the last two trigger after a spin:

The star attraction of this slot is the Free Games bonus feature. To trigger it, you will need to land 3 or more Scatters anywhere on the reels. The Scatter symbol is depicted by an image of the entrance to the Coco Bongo nightclub. The more Scatters you land then the more Free Games you will be awarded. For example, 3, 4, or 5 Scatters award 10, 15, or 25 Free Games. Wild symbols are very important during this feature as any Free Game win that contains a Wild will be randomly multiplied by 2, 3, 4, or 5 to really boost your chances of landing a massive windfall on the reels. Incredibly, the Random Wild features are also active in Free Games and appear more often and this feature can also be retriggered by landing 3 or more Scatters on the reels. Lastly, pay special attention to the masked version of Milo during this feature as if you land 1 or 2 of these symbols then you will be awarded up to 5 extra Free Games!

Best Welcome Bonus for The Mask

More Bonuses for The Mask

The graphics are a visual treat for the eyes and a faithful representation of the movie as the game takes place right in front of Edge City with a twinkling star-lit sky above and lots of streetlights and buildings below. Symbols are beautifully designed and consist of characters from the movie such as Stanley, Tina, Milo, The Mask, a Hat, as well as a Bag of Cash and the traditional A – 10 icons. The animations are absolutely superb as they recreate the chaotic and over the top nature of the movie especially whenever one of the Random Wild Features triggers. I also like how the Free Games feature actually takes place in the Coco Bongo nightclub of the movie with lots of dazzling lights and spotlights used to great effect here.

The music is dramatic, fast-paced, and features audio excerpts from the movie. It captures the wild and wacky theme of the game perfectly.


Our Verdict on The Mask

This cracking online slot is made by NextGen Gaming and I am happy to report that it is an excellent adaptation of the movie and a fine way to pay homage to it's 25th anniversary. The Mask features outstanding visuals, jaw-dropping animations, and a wonderful range of bonus features to keep you spinning those reels for hours on end. The Random Wilds Features triggered quite a lot while playing with plenty of Wilds to help you land lots of payouts on the reels. The most rewarding feature by far is the Free Games bonus game as if you are lucky enough to land the 5X Wild Multiplier then you can win up to an incredible 37,500X your stake on every Free Game! Variance-wise, I found this slot to be Medium so you will win decent-sized cash prizes the more you play it. For more fun online slots based on movies, check out Bridesmaids and Ace Ventura Pet Detective.

Buckle up and strap yourself in for a wacky ride when you put on The Mask!