Foxin' Twins from NextGen Gaming: Slot Review - your favourite fox is back!

It’s time to visit Foxy and his family once more in this latest addition to the hugely successful Foxin’ series from NextGen Gaming. This popular online slot series is based on a well-off family of foxes who live it up in a huge mansion on a sprawling estate with their adorable fox pups. Since the release of their last game, a football-themed slot called Foxin’ Wins Football Fever, the foxes have been raking it in and now want to share some of their wealth with you! Read on to see if Foxy and co will do just that as we spin the reels in this exciting new slot.

Foxin' Twins is a 5 reel slot with 50 paylines that includes Free Games, Multipliers, a Gamble Mode, and a SuperBet feature. 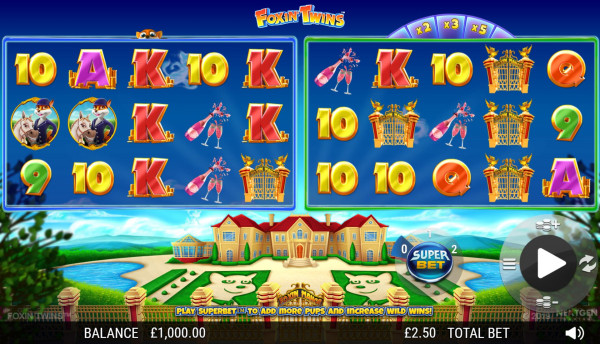 The first feature to highlight is that this game is played on dual reel sets with 5 reels and 25 paylines each. This essentially means that there are 10 reels with 50 paylines active which means double the action and excitement! The Wild symbol in this slot is naturally represented by an image of Foxy holding a pipe and substitutes for all other symbols in the game apart from the Scatter. It is also the highest paying symbol as if you happen to land 5 of these symbols on an active payline then you’ll be treated to a nice payout worth 20X your wager.

Similar to other Foxin’ games such as Foxin’ Wins and Foxin’ Wins A Very Foxin’ Christmas, this slot comes with a SuperBet feature. This an additional wager which allows you to level up for even greater win potential. Keep a close eye out for Fox Pups that can appear randomly above the reels and can turn symbols into either Blue or Green Wilds based on your SuperBet level. If the pups turn symbols into Blue Wilds then more Wilds will be added to the reels:

If Green Wilds appear then symbols will be multiplied by the value shown above the reels. Similar to the Blue Wilds, the multipliers are dependant on what you wager via the SuperBet feature:

Foxin’ Twins also comes with 2 bonus features which can trigger randomly on any spin:

The Scatter symbol in this game is illustrated by a stack of gold bars. Hit 3 or more of these symbols on the reels to trigger the special Team Pup Free Games feature. The more Scatters you land the more Free Spins you shall be given. For example, 3, 4, 5, 6, 7, 8, 9, or 10 Scatters will get you 10, 15, 20, 25, 30, 50, 75 or 100 Free Spins. Once in Free Spins, both random bonus features can trigger at the same time on every Free Spin along with payouts occurring not only from left to right but also from right to left! Satisfyingly, it is also possible to retrigger this feature to get even more Free Spins by landing additional Scatters. There are up to 200 Free Spins to claim here with the SuperBet level determining how high the multipliers can go.

The last feature to discuss is the optional Gamble mode which triggers whenever you land a win on the reels. In this risky but exciting feature, you get to pick the colour or suit of a playing card in order to increase your winnings. Guess the right colour to double your winnings but if you manage to guess the suit correctly then you’ll quadruple your winnings!

Like the other games in the Foxin’ series, this slot features cute and colourful cartoon-style graphics. Once again, it takes place in front of a mansion which looks considerably larger than the previous residence the foxes lived in! A nice visual effect is the well-kept lawn in front of the house which has a nice fox head pattern mowed in! Symbols are wonderfully rendered onscreen and consist of Foxy, Gold Bars, a Champagne Flute, an Aeroplane, a Horse, a Gate, as well as classic A – 9 icons. The animations are superb as the dual reels spin together in perfect motion with symbols bursting into life in dramatic fashion when part of a winning payline. It is particularly pleasing when you land a big win on the reels as the Fox Pups proceed to shower the screen with a pot full of gold coins.

The music features a laidback lounge-style backing track. It fits in seamlessly with the Cute Animal theme of the game.


Our Verdict on Foxin' Twins

Leading software studio NextGen Gaming created this slot and it’s yet another top-quality game to add to the smash-hit Foxin’ franchise. Featuring fantastic cartoon graphics, exciting gameplay, and jam-packed with a tonne of rewarding bonus features, it is one of the best slots released by NextGen Gaming in recent memory. The SuperBet feature although expensive to use is extremely lucrative as you can benefit from lots of Wilds as well as massive 20X multipliers along with the Team Pup Free Games where you can win up to 200 Free Spins which pay both ways! The top prize for this game is a gigantic 20,000X your wager which can be won when you fill all of the reels with Wilds and have the active 20X multiplier in play. In terms of variance, it is quite High so make sure to bring lots of bankroll before arriving at Foxy’s mansion! For slots with a similar Cute Animal theme, check out The Dog House and Tales of Dr. Dolittle.

Have a foxin’ good time on the reels with lots of cash prizes up for grabs in Foxin' Twins!