Christmas is just around the corner and you know what that means as software studios all across the world release festive themed games to really pull in the punters over the holiday season. This latest release from software studio NextGen Gaming is just that but there is a nice caveat to it as it is based on the hugely popular Foxin series. We really loved playing Foxin’ Wins (read our review here) so we could not turn down the opportunity to visit those rich foxes again who are still living it up in their luxurious mansion. Let's see what festive fun they are getting up to for the Christmas holidays.

Foxin' Wins A Very Foxin' Christmas is a 5 reel slot with 25 paylines that includes Free Games, Random Bonuses, and a SuperBet feature. 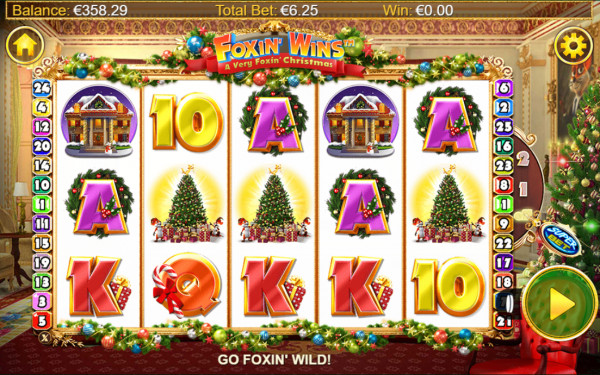 The first feature to highlight is the obligatory Wild symbol and this is represented by Mr Foxin wearing a Christmas hat. This symbol substitutes for all other symbols in the game except the Scatter to help form winning combinations on the reels. It is the most valuable symbol in the game as if you land 5 of these symbols on an active payline then you’ll be celebrating Christmas in real style with a payout of 2,000 coins! Make sure to keep an eye out for the Fox Pups as you play the game as they can pop up from time to time on the reels and they turn regular symbols into Wilds to really help boost your chances of landing a big win.

The Scatter symbol is illustrated by a pot filled with gold coins. If 3 of these symbols appear on the reels then you will trigger the Free Games feature. In this bonus game, you’ll be awarded 10 Free Games and all wins are subject to a nice 2X multiplier. If you manage to land 3 more Scatters while in this feature then you will be awarded 10 extra Free Games. A pleasing aspect of this feature is that more Fox Pups will appear on the reels to help generate even more Wilds.

Like most NextGen Gaming slots, this game uses the SuperBet feature. This is an additional wager where you increase your stake to allow even more Fox Pups to show up on the reels. The SuperBet options are as follows:


The final feature to discuss is the Random Bonus. This feature is a random event that occurs in the base game and either Fox Funds or Leprechaun Shakedown will activate to award you some nice cash prizes. If the Leprechaun Shakedown feature triggers then you will only be awarded prizes if the wily Leprechaun is caught so make sure to catch him!

The presentation of the game is simply stunning as it set inside the ostentatious mansion of Mr Foxin. We have had the pleasure of visiting the Foxin house before in Foxin' Wins but this time around it features a nicely decorated Christmas tree located to the right-hand side of the reels complete with lots of presents below it. Symbols are festive themed as you might expect and consist of Mr Foxin wearing a Christmas Hat, Mrs Foxin driving a red car filled with gifts, a Snow Globe, a Pot of Coins, a Christmas Tree, and the standard A – 10 icons. The animations are a real treat as symbols burst into life and enlarge whenever they are part of a winning combination on the reels.

The music is melodic, upbeat, and of a jolly nature. It ties in really well with the Christmas theme of the game.


Our Verdict on Foxin' Wins A Very Foxin' Christmas

NextGen Gaming created this festive themed slot and it is a great way to get reacquainted with Mr Foxin and those cute little Fox Pups once more. The game is extremely fun to play, full of amazing features, and Christmas cheer. The SuperBet feature is excellent as it allows players to control their bets so they can decide if they want to pay for additional special features. It is also pleasing that you can retrigger Free Games and that Free Games winnings are nicely doubled. I found this game to be of Medium to High volatility so it might take you some time to land a decent enough payout as you play the game but it is definitely worth your patience as the rewards can be huge considering the fact that the top prize is a fantastic haul of 2,000X your bet!

Get Foxed with Foxin' Wins A Very Foxin' Christmas!