Find out how to talk to animals with the famous Dr. Dolittle when you play this extremely fun Quickspin slot.
casino game review quickspin slots tales of dr. dolittle

Ever wondered what it would be like to talk to animals? Well, now you can in this new slot from top software studio Quickspin! This game is loosely based on the beloved Dr. Dolittle character who is the main character of a series of children’s books that was penned by English author Hugh Lofting all the way back in 1920! Dr. Dolittle is a caring doctor who shuns humans in favour of animals as he can magically speak to them in their own tongue. This character became super popular in Hollywood as he was played onscreen by Eddie Murphy in a blockbuster movie released in 1998 and will be returning to the big screen once more in a new adaptation where he will be played by none other than Iron Man himself Robert Downey Jr! Join us as we attempt to talk to a dog, a parrot, and a horse to see if they help us land a nice cash payout on the reels?

Tales of Dr. Dolittle is a 5 reel slot with 25 paylines that features Respins, Wild Multipliers, and Free Spins with Guaranteed Wilds. 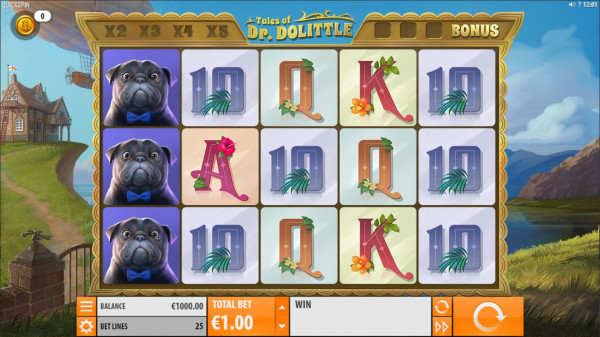 This game features a bunch of cute cartoon style symbols including an image of Dr. Dolittle along with animals symbols depicting a Parrot, a Horse, Llamas, as well as a cute Pug wearing a bow-tie! Keep your eyes peeled for the Dr. Dolittle symbol as you play the game as it is the highest paying symbol in the game. Land 5 of these symbols and you’ll be squawking like a happy parrot with a nice payout worth 2X your wager.

The Wild symbol in this game is represented by an image of two Llamas. Like most Wilds, it substitutes for all other symbols apart from the Scatter symbol but it also comes with a Multiplier value attached which pays out when part of a winning combination:

The final feature to highlight is the Free Spins bonus game. This triggers when you land 3 or more Scatter symbols on the same spin. The Scatter symbol is denoted by an image of Dr. Dolittle’s zeppelin. Once activated, you will be awarded 10 Free Spins where every Free Spin is guaranteed to feature at least 1 Wild Multiplier symbol. This essentially means that it is possible to get a 5X multiplier on every Free Spin. The Respin feature is also active here to further enhance your chances of racking up lots of big wins in a row.

With this being a Quickspin game, you just know you are in for a treat in terms of presentation and this game does not disappoint one bit as it features superb cartoon style graphics. The game takes place just outside Dr. Dolittle’s house which is situated on the edge of a cliff with his zeppelin in the background and a cloudy blue sky overhead. Symbols are beautifully designed and consist of Dr. Dolittle, a Parrot, a Horse, a Pug, along with classic A – 10 icons. You just can’t beat a Horse wearing glasses or a Pug sporting a spiffy bow-tie! The animations are visually stunning as symbols are highlighted by a bright orange frame when part of a winning payline with the screen behind the reels dramatically speeding up whenever you trigger the Respin feature.

The music features a very charming and upbeat soundtrack that ties in really well with the Adventure theme of the game.


Our Verdict on Tales of Dr. Dolittle

Leading software studio Quickspin produced this slot and we are happy to say that it is a fine adaptation of a much-loved character. This game features superb graphics, a wonderfully upbeat soundtrack, along with a great range of bonus features to ensure you keep on talking to the animals for as long as possible! I found that the Respin feature triggered quite often and it is here where you can win some big cash payouts especially when you string together a few wins with lots of sticky symbols present on the reels. The Free Spins bonus game, on the other hand, took a bit more time to trigger but is definitely worth your patience as you will be awarded 10 Free Spins with lucrative Wild Multipliers for every Free Spin. We should also highlight that the top prize for this slot is a fantastic 2,515X your bet! When it comes to variance, I would say this slot is Medium so expect a few dry spins but also decent cash payouts too. For slots with a similar Animal Adventure theme, check out Wonder Hounds and Pets Go Wild.

Talk to the animals to win lots of cash prizes in Tales of Dr. Dolittle!