This latest release from software studio NextGen Gaming pits players into a whole of host of battles throughout time as 5 fearless female warriors fight the good fight to protect us all. The warriors consist of Freya who is a Valkyrie of Valhalla, Harriet Hellstorm who is a highly decorated Air Force major, Valda Dragonslayer who is a noble knight, Raffaella Blaze who is an expert gunslinger, and Ivy Sabreclaw who is a sacred protector of the woodlands. Let’s join these rebellious renegades of the past and lead them to victory where hopefully a nice cash prize awaits you when the dust settles!

Renegades is a 5 reel slot with 243 ways to win that includes Wild Multipliers, Mega Symbols, and Free Games. 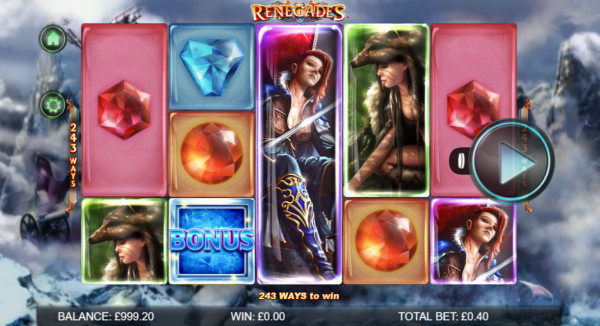 The first feature to highlight is the Wild symbol and this is represented by a bright orange flame with the word ‘Wild’ displayed inside. This symbol substitutes for all other symbols apart from the Scatter symbol to help form winning combinations on the reels. This symbol is also one of the highest paying symbols in the game as if you land 5 of these symbols on an active payline then you’ll be celebrating big time on the battlefield with a wonderful payout of 250 coins!

As you play the game, you will notice massive symbols appearing on the reels. These huge symbols are called Mega Symbols and can pop up on any spin in the game and amazingly they can appear up to 3 symbols high by 3 reels across! When they do show up, 2 or 3 adjacent reels will lock into place and spin together to display these symbols to really boost your chances of landing a mega win.

The Scatter symbol is illustrated by a bright blue box. If you manage to land 3 or more of these symbols in any position on the reels then you will trigger the Renegades Free Games feature. In this bonus game, you will receive 8 Free Games and the reels will only contain a randomly chosen female warrior symbol along with the Wild, Scatter and 5 Gem symbols. This feature can be highly lucrative as it’s possible to land wins up to an incredible 759X your stake on each Free Game spin but only when the warrior Freya is chosen for it. It is also possible to retrigger more Free Games by landing additional Scatters while in this feature.

The game is visually stunning to look at and to be honest it’s one of the best looking games that NextGen Gaming has made in quite some time. The backdrop of the slot is a snowy misty mountain covered with cloudy skies. The female warriors are superbly designed and each one is beautifully rendered on screen. Symbols consist of the 5 renegades and an assortment of different coloured gems. The animations are very impressive as symbols light up and expand whenever they are part of a winning combination on the reels.

The music is orchestral, tense, and dramatically increases in tempo when you land a win. It complements the action theme of the game really well.


Our Verdict on Renegades

This action-packed slot is made by leading software developer NextGen Gaming. It's a real visual feast for the eyes which makes it a joy to play and it contains a nice set of bonus features to keep the excitement levels ticking along nicely. The Mega Symbols break the gameplay up nicely and you can really boost your wins when you land a couple of these massive symbols on the reels. The Free Games bonus game was quite hard to trigger but it is definitely worth the wait as you can win an impressive 759X your stake if the warrior Freya is selected for it. I found this slot to be of Medium variance so expect to land plenty of decent cash payouts here. For similar-themed slots, check out Girls with Guns - Jungle Heat or Girls with Guns – Frozen Dawn.

Join five brave warriors to find your fortune when you play Renegades!