Girls with Guns - Frozen Dawn from Microgaming: Slot Review - the girls with guns are back!

The Girls are back for some more action and can you help them defeat Saskia from taking over the world?
casino game review girls with guns frozen dawn girls with guns jungle heat microgaming slots

This game is a direct sequel to the hugely successful Girls with Guns – Jungle Heat, also made by Microgaming. Katherine, Maria, Kira, Alex, Zoe, and Jess are back for some more action! After disposing of Hector and his men in the tropical jungle of the last game, the girls find themselves in a harsh cold environment this time around and a new villain called Saskia as she plans to take over the world.

The game has 5 reels, 243 ways to win, and has some cool features such as Expanding Wilds, Free Spins, Frozen Wilds and Magnetic Wilds. 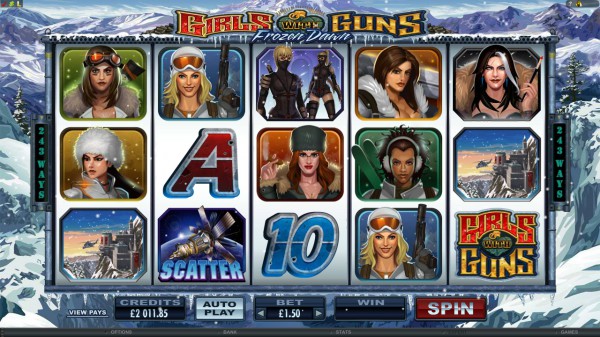 The first feature I noticed while playing this game was the Shootout Bonus feature. This is triggered after a non-winning spin and one of the girls might show up and target one royal (A, J, K, Q, 10) symbol on each reel. You then get to pick one of the targeted symbols and the girls will shoot it and you will win a cash prize. This is a random feature but not a bad consolation prize when you don’t form a winning combination on the reels.

The Wild symbol is denoted by the Girls with Guns logo and it substitutes for all symbols except the Scatter symbol which is depicted by a satellite image. In addition to this Wild symbol, there is also a Wild symbol that is a silhouette of the girls and it only appears on reel 3. When this symbol pops up, it will expand and make the entire reel wild.

The game’s standout feature is the Free Spins mode. You need to land 3 or more Scatter symbols to trigger this mode. You will be given 12 free spins and a randomly assigned feature between Frozen or Magnetic Wilds. If you are given Frozen Wilds then the Wilds will become sticky and stay in place for 3 additional spins before melting away. Any Frozen Wilds forming a full reel stack will that reel wild for the remaining free spins. Magnetic Wilds are quite different as they will only appear on reel 5 and these Wilds will be pulled to the leftmost available position on the reels during the next spin. Magnetic Wilds remain in place until the end of the feature, unless they form a full stack which will explode abruptly on the next spin.

The game is action packed and features some amazing graphics. In particular, I enjoyed watching the nicely produced intro videos of the girls. I also liked how the game displays the Arctic environment with snow drifts, icicles and snow-capped mountains in the background.

One thing I did notice was the amount of symbols that the game uses, there is a whole tonne of them! Each symbol is superbly detailed and they run along the reels nice and smoothly. The animations of the symbols are fantastic as each character comes to life and moves about on screen when you form a winning combination on the reels.

The music in keeping with the theme of the game is quite rock n roll and suits this slot down to a tee as it creates a nice tension-filled atmosphere the more you play.


Our Verdict on Girls with Guns - Frozen Dawn

Girls with Guns - Frozen Dawn is produced by Microgaming is one hell of an adventure in an Arctic Tundra and it’s jam packed full of features. In particular, the Free Spins mode is a great addition to this slot. It is a worthy sequel of the first game and if you were a fan of that game then you will enjoy this game even more.

Lock and load with the girls in Girls with Guns – Frozen Dawn!