It’s time to team up with Merlin the magician once more in this new release from NextGen Gaming! This hotly anticipated sequel to the smash-hit online slot Merlin's Millions centres on Merlin as you would expect as he safeguards a secluded glade that’s bursting with magical power and riches. Some believe that the stream of water running through this special place contains the secret of immortality. Others believe it is a secret location for a stash of powerful crystals that can grant you the power of foresight if you touch them. Either way, let’s spin the reels in this exciting game to find out! 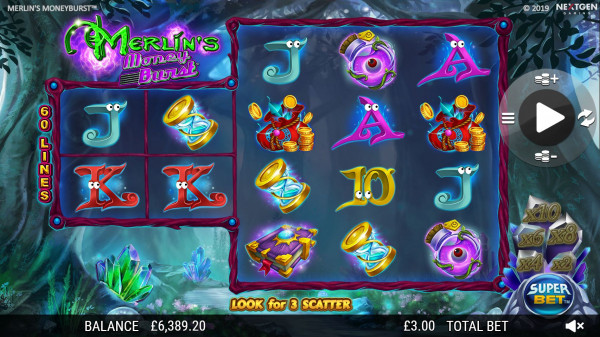 The first feature to discuss is that this game features the popular Money Burst mechanic that’s borrowed from the hit WMS slot Bruce Lee. This means that the first two reels display only two symbols whereas reels 3, 4, and 5 will display 4 symbols each. The first two reels are extremely important as they are crucial to landing big wins on the reels.

Merlin’s Money Burst features a range of magic-related symbols that appear on the reels. These include Hour Glasses, Potion Bottles, Books, and Sacks of Coins. The most rewarding symbol from these is the Spellbook as it pays out 8.33X your wager for landing 5 on a payline. The Wild symbol in the game is represented by an image of Merlin and like most Wilds, it substitutes for all other symbols apart from the Scatter. It is also the most valuable symbol in the game as it pays out a hefty 83.3X your wager for landing 5 across a payline.

Like other NextGen Gaming slots such as Foxin' Twins, this game offers an additional bonus bet option called SuperBet. The more you are willing the pay then the more enhancements you will receive on the reels. For example, when you get the Merlin Wild as part of winning combination then it will add a nice 10X multiplier into the mix when you bet at SuperBet Level 5! The multipliers vary in value depending on which SuperBet level you bet with. They are as follows:

If you land matching symbols on reels 1 and 2 then you will trigger the Merlin’s Held Respins feature and be awarded 5 respins. During this feature, the first 2 reels will remain in place while Merlin randomly changes symbols into Wilds on the other 3 reels to further boost your chances of landing a big cash payout.

The Scatter symbol in the game is illustrated by a sparkling gemstone surrounded by what looks like a dragon claw. Land 3 of these symbols on reels 3, 4, and 5 on the same spin to trigger the Free Spins bonus round. Once in, you will be awarded 10 Free Spins and once again Merlin may wave his wand to transform symbols into Wilds on reels 3, 4, and 5. Pleasingly, you can retrigger the feature by landing additional Scatters to get 10 more Free Spins.

We’ve saved the best for last as the standout feature of the slot is the highly lucrative Merlin's Wild Spins feature. Triggering it can be a bit tricky as you will need to land matching symbols on reels 1 and 2 as well as 3 Scatters on reels 3, 4, and 5. You will then be awarded 10 Wild Spins with all symbols on reels 1 and 2 becoming Wild along with Merlin randomly adding even more Wilds on the 3 other reels. It’s also possible to retrigger this feature so you can get up to 20 Wild Spins in total here.

This game features exceptional graphics as the action takes place deep inside what looks like an enchanted forest with crystals sprouting up from the ground and magnificent tall trees in the distance. Symbols are wonderfully designed and have a certain cartoonish-like quality to them and include Merlin himself, Books, Hour Glasses, Sacks of Coins, along with classic A – 10 playing card icons. The animations are worth praising as symbols drop down onto the reels quickly and are marked by a bright colourful frame when part of a winning combination. A particular highlight is when Merlin decides to make an appearance as he waves his wand to magically transform symbols into Wilds. It really adds that little bit more to the gameplay.

The music is soothing and melodic with lots of soft piano sound effects and rhythmic chanting used. It complements the Magic theme perfectly.


Our Verdict on Merlin's Money Burst

NextGen Gaming produced this game and we are delighted to report it is the best iteration of Merlin ever released by the company. Featuring top-notch graphics and animations, a superb matching soundtrack, along with a host of excellent bonus features, you’ll be zapping those reels with Merlin’s staff for a long time to come! The 3 different bonus games offer plenty of variety with the Wild Spins feature being the most lucrative as you benefit from 2 Wild Reels along with plenty of random Wilds added in by Merlin himself. It also has to be said that this game expertly uses the Money Burst engine to great effect here to really make the gameplay even more exciting. The top prize for this game is a massive 37,500X your wager which can be won in Free Spins when you have the 10X Multiplier active from the SuperBet feature. The only downside to this slot is that the RTP (95.5%) is a bit on the low side without the SuperBet feature activated. For variance, this slot is quite High so make sure to have plenty of bankroll on hand before hanging out with Merlin here! Looking for more slots also featuring Merlin the magician? Then check out Rise of Merlin and Merlin's Magic Mirror.