Merlin's Millions is one of the most popular games on the casino circuit at the moment. NextGen Gaming are the creators and the game is immediately notable for its swift loading times. 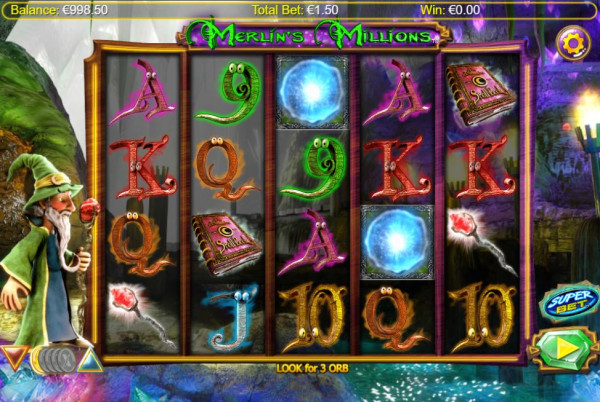 Of course, Merlin’s Millions comes with typical slot machine features. There are wild symbols, there are free spins rounds and there is a ‘Pick Me’ feature. Certainly a good choice of bonus features; it depends on the type of player you are, which one you’ll love. Personally, the ‘Pick Me’ feature is my favourite. Once three owls appear anywhere on the reel, loads of owls flock to the reel: in total 20 owls. From these owls, players can have their pick and receive a win with each pick. Well, that is unless you pick the wrong owl and receive a ‘collect’ message. Then, you’ll be right back to the base game, chasing after more birds. However, chances are you are returning to the reel, having bagged yourself a nice sum of prize money.

The theme of this NextGen Gaming slot machine is unsurprisingly magic. But not the kind of scary and dark magic, but the fun and joyful magic. Merlin, the famous wizard, wields his magic wand to the left, while the reels spin seamlessly.
The attention to detail that was applied when graphically interpreting this slot is impressive. Alongside the owl, the wand and other well-designed symbols, even the classic letter symbols that feature in this online game look quirky and fun. The As and Qs and Js of Merlin’s Millions gawk at players through their big round eyes.

This NextGen Gaming slot machine comes with the superbet feature. The button to activate the feature can be found on the right-hand side of your screen and allows players to pick a multiplier for his next win. This certainly adds complexity to NextGen’s Merlin’s Millions. We all know that sometimes it can be boring to simply amend bet level and coin value. This feature adds another dimension to slot gaming. While it does increase the risk in the game, it does also heighten the potential payouts.
Whether or not a player embraces superbet is down to personality type; Are you a daredevil or scaredy cat? That is the question.

Our Verdict on Merlin's Millions

This NextGen Gaming slot machine ticks all the boxes. Great design, good wins and an exciting bonus game. The theme 'magic' is a little standard, yet, the interpretation of this theme is less dark than in other slot machines, which makes Merlin's Millions a rather uplifting and quirky game. The wins may not be gigantic per se, but the superbet feature allows players to take control in their hands.