Magic of Pandora from 2 By 2 Gaming: Slot Review - a box definitely worth opening!

Unlock the secrets of Pandora's box to claim unimaginable riches on the reels in this wonderful 2 By 2 Gaming slot.
2 by 2 gaming casino game review magic of pandora microgaming slots

Take a magical trip to Ancient Greece in this new release from 2 By 2 Gaming. This slot is based on the legend of Pandora who was created by Hephaestus on the orders of the all-mighty Greek God and ruler Zeus. Pandora was said to be the first woman moulded from the earth and was given unique gifts from each of the gods when she was brought to life. She carried a jar which was often referred to as a box which was said to unleash unspeakable evil upon the world should it ever be opened. Read on to see if opening this box will lead to a nice cash payout on the reels and hopefully not bring about an unwelcomed apocalypse instead!

Magic of Pandora is a 5 reel slot with 25 paylines that includes Free Spins, Extra Wilds, Wild Reels, and Additional Paylines. 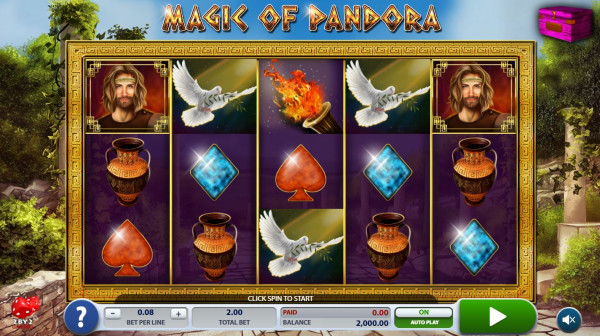 Top Casinos for Magic of Pandora

The first feature to discuss is the Wild symbol which is depicted by the game logo. This symbol like most Wilds, replaces all other symbols apart from the Scatter symbol to help create winning combinations on the reels. It only appears on reels 2, 3, 4, and 5 in the main game.

Magic of Pandora has 4 special bonus features which can trigger on any random spin. They are as follows:

An image of Pandora's home is the Scatter symbol in this slot. Land 3 or more of these symbols anywhere on the reels to receive a cash prize plus trigger the Free Spin bonus round. The more Scatters you land then the more Free Spins you'll receive. For instance, 3 awards 8, 4 will get you 12, and land 5 Scatters to receive 16 Free Spins. You will then be taken to a new screen where you can decide to play with one of the random bonus features highlighted above or spread your spins out among these features instead. During either feature, Pandora’s Box may open to retrigger Free Spins and you will then receive 4 more Free Spins.

More Bonuses for Magic of Pandora

The game features crisp and highly detailed graphics as it takes place in front of a garden with various stone columns along with a path that leads to Pandora’s home. The reels are exquisitely designed with intricate embossed detail and a glossy gold inlay. Symbols are also nicely polished and consist of Pandora, a Box, a Male, a Flaming Torch, a Dove, a Vase, an Eagle, as well as classic Heart/Diamond/Spade/Club icons. The animations are wonderful as symbols fly down the reels rapidly and are highlighted by a bright green magical frame when part of a winning combination. For example, the Heart symbol shines brightly and proceeds to enlarge when it is part of a winning payline.

The music is atmospheric and relaxing with a soothing soundtrack playing softly in the background. It matches the Greek mythology theme really well.


Our Verdict on Magic of Pandora

This game is produced by 2 By 2 Gaming in association with Microgaming and is a highly enjoyable trip to Ancient Greece where opening Pandora’s box can lead to all sorts of cash payouts! Magic of Pandora features beautifully designed graphics, a wonderful matching soundtrack, along with a great range of rewarding bonus features. I found the random bonus features triggered quite frequently when playing with the Additional Paylines feature being the most rewarding one since you have a massive 50 paylines to play with instead of the regular 25. The Free Spins bonus game took quite a few spins to activate but is worth the wait as it lets you distribute the random Bonus Features among your Free Spins. It is also here where you can win the game’s top prize which is a fantastic 2,000X your stake! Variance-wise, I would say this game is Medium so you will find that wins occur more frequently the more you play. For slots with a similar Greek Mythology theme, check out The Golden Owl of Athena and Olympus Thunder.

Discover a trove of ancient riches on the reels when you play Magic of Pandora!