The Golden Owl Of Athena from Betsoft Gaming: Slot Review - knowledge is key!

Seek out the bringer of insight in ancient Greece to win a massive cash reward!
betsoft gaming casino game review slots the golden owl of athena

In ancient Greece, the goddess Athena was regarded as the protector of various cities across Greece and in particular Athens from where she received her name. She was known as the goddess of wisdom, handicraft, and warfare and was accompanied everywhere by a beautiful golden Owl which was said to be the keeper of sacred knowledge as well as the bringer of insight. This new release from popular games provider Betsoft Gaming focuses on Athena and her little Owl as players are transported to ancient Greece to seek out this bird and hopefully bag a nice big cash payout for doing so!

The Golden Owl Of Athena is a 5 reel slot with 10 paylines that includes Free Spins, Scatter Wins, a Buy feature, and a Double Up bonus game. 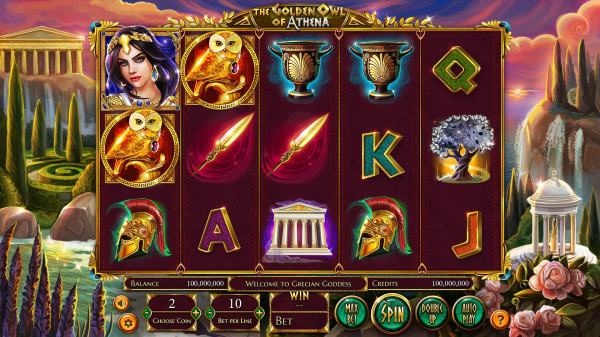 The Wild symbol in this game is illustrated by an image of the Owl. Typical to most Wild symbols, its main job is to substitute for all other symbols to help create winning combinations on the reels. Unusually, this symbol also acts as the Scatter as well and awards Scatter Wins from anywhere on the reels.

The last feature to mention is the optional Double Up bonus game which is triggered whenever you land a win on the reels. In this risky mini-game, players can bet half or all of their winnings on the flip of a coin. Guess correctly and your winnings will be doubled but thread carefully as if you guess wrong then you will lose all your current winnings!

This game features beautifully drawn graphics and a spectacular backdrop depicting the Acropolis in all its glory complete with swirling clouds, trees, and a twinkling river. Symbols are a tribute to the goddess Athena and consist of Athena herself, a Helmet, a Cup, Olympus, a Spear, an Owl, the Tree of Knowledge, as well as the standard A – J icons. The animations are superb as symbols shake and shine brightly when part of a winning payline and I really liked how the background changes from day to night whenever you trigger the Free Spins feature as it makes it feel like a whole new game to play.

The music is enchanting and orchestral. It ties in perfectly with the ancient Greece theme of the game.


Our Verdict on The Golden Owl Of Athena

Betsoft Gaming produced this slot and it’s a wonderful tribute to the ancient Greek goddess of wisdom. This game has outstanding visuals, is super easy to play, and has just about the right amount of bonus features to keep players spinning the reels again and again. The standout feature of this slot is the Free Spins bonus game as it offers the potential for massive cash payouts especially if you land a high paying symbol as the special symbol for it. It’s also great that Betsoft Gaming included a ‘Buy’ button which should appeal to impatient players who don’t like waiting around for their Free Spins game to trigger! I found this slot to be of Medium variance so you will find wins occur quite frequently the more you play and with a top prize worth 5,622X your bet to aim for then what is stopping you from seeking out the Golden Owl right now? For slots with a similar ancient Greece theme, check out Divine Fortune and Furious Four.

Let the goddess of wisdom guide you to a huge cash payout when you play The Golden Owl Of Athena!