King of Macedonia from IGT: Slot Review - reap the spoils of war!

Offer your sword to Alexander the Great as he plots his next campaign in this excellent slot from IGT.
casino game review igt king of macedonia slots

Get ready to join history’s most successful military commander on the battlefield when you spin the reels in this hugely popular online slot from IGT. The commander in question is, of course, Alexander the Great who not only was undefeated in battle but also created one of the largest empires of the ancient world all before he hit the age of thirty! Famous Irish actor Colin Farrell even portrayed him on the big screen in the lacklustre 2004 movie Alexander. Let’s join Alexander the Great as he embarks on his latest military campaign to expand the Empire and hopefully discover a whole lot of ancient treasure along the way!

King of Macedonia is a 5 reel slot with 40 paylines that includes Random Multipliers, Gigantic Wilds, Sticky Wilds, and Free Spins. 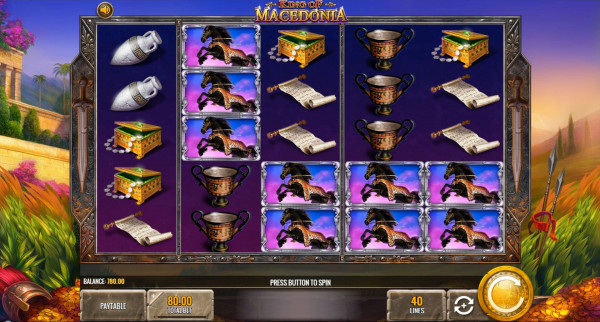 Top Casinos for King of Macedonia

King of Macedonia features an assortment of medieval-like symbols that appear on the reels as you play the game. These include Horses, Helmets, Violins, Chests, Scrolls, Goblets, and a Queen. Keep your eyes peeled for the latter symbol as it is the highest paying symbol in the game. Land 5 on a payline and you will be awarded a fine cash prize worth a hefty 200 coins.

The Wild symbol in the game is naturally represented by an image of Alexander the Great himself. The main job of this symbol is to substitute for all other symbols apart from the Scatter to help form winning combinations. It is one symbol you can’t miss on the reels as it is in fact 2 reels wide! The only drawback here is that it only appears on reels 2 and 4.

The Scatter symbol is illustrated by an image of a shield with the word ‘Bonus’ placed below it. This symbol only appears on reel 1 in the main game. When it does show up without any Wild symbols present on the reels then you will be awarded a random multiplier ranging between 2X and 10X. This is referred to as the Random Wild Multiplier feature in the game.

King of Macedonia also comes with a King Free Spins bonus round. To trigger it, you will need to land the Scatter symbol on reel 1 and a Wild symbol on either reel 2 or 4. Once activated, you will be given 8 Free Spins and any reel positions with Wild symbols that triggered the feature will stay Wild for the entire feature.

More Bonuses for King of Macedonia

The graphics are fairly decent as the action takes place in front of a large temple with the ground covered with gold coins along with a dusky sky overhead. Symbols in the game are intricately detailed and are comprised of a Queen, a Goblet, a Vase, a Violin, a Horse, a Helmet, and of course a striking image of Alexander the Great himself. The animations are smooth as symbols speed down the reels quickly and burst into life when part of a winning combination. It is particularly exciting whenever the Gigantic Wild appears on the reels as it dwarves the other symbols in size. It really enhances the gameplay.

The music is of the epic variety as it features a raucous backing track. It actually works really well with the Historical theme of the game.


Our Verdict on King of Macedonia

Software giants IGT created this slot and we are happy to report it's a far more fun and accurate representation of Alexander the Great than that dull 2004 movie! The presentation of the game is a little dated but it’s of little concern to be honest as it’s all about the lucrative bonus features and exciting gameplay here. Gigantic Wilds appear on the reels from time to time to keep things interesting and it’s nice you can land up to a 10X multiplier whenever the Scatter symbol appears on reel 1 without any Wilds present. The star attraction of the game is the King Free Spins feature as it is here where you can benefit from plenty of Free Spins with Gigantic Wilds locking into place to further boost your chances of landing a nice cash payout. The top prize for this game is a relatively low 312.5X your bet which can be achieved by using the random 10X multiplier in the main game. In terms of variance, I would say this game is Low to Medium so it will pay out quite often with a steady stream of small-sized cash prizes. For slots with a similar Military theme, check out Poltava and Glorious Empire.

Seek out lots of lucrative ancient treasure with Alexander the Great when you play King of Macedonia!