Poltava from ELK Studios: Slot Review - change the past!

The Great Northern War rumbles on between Russia and Sweden during the 18th century. Who will win? You decide!
casino game review elk studios poltava slots

Travel back in time to the early 18th century to witness the army of Peter the Great of Russia take on the Swedish royal army when you play this online slot from top games provider ELK Studios. Both armies have been battling it out for close to 9 years in a war that is commonly referred to as the Great Northern War. The air is thick, cannons rumble in the distance, and horses gallop alongside huge marching armies. The time has now come for one final battle to see who will emerge victoriously. As history tells us, the Russians held firm and won that day but now you have a chance to change the course of history by guiding the Swedish royal army to an unlikely victory on the battlefield. The only question that remains now is which side will you choose to go with? 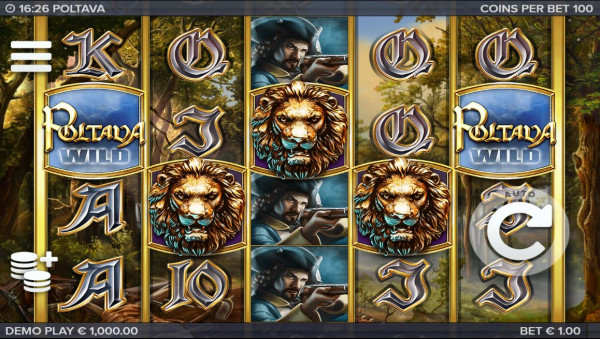 The first feature to highlight is the obligatory Wild symbol which is represented by a blue background with the word “Wild” displayed inside. Like traditional Wild symbols, the main job of this symbol is to substitute for all other symbols except the Scatter to help create winning combinations on the reels.

Whenever you land a full stack of 4 of the Soldier, Cannon, or Horse symbols on the reels then you will trigger the Marching Reels feature. In this neat feature, you will be awarded a free respin and the stacked symbols will proceed to ‘march’ and move to the right of the reels to generate further respins and troop movements. This process continues until the army reach reel 5 or no more identical symbols land on the reels.

The Scatter symbol is represented by an image of a golden lion which is the symbol for the Tsar. Land 3 of these symbols on reels 2, 3, and 4 to trigger the Flames of War Free Spins feature. Here, you’ll be awarded 3 Free Spins which is quite a small offering but you will be pleased to know that the Scatters will act as Sticky Wilds throughout this feature and if you land additional Scatters then you will receive more Free Spins. Each Scatter contributes to one extra Free Spin so if you are lucky enough to keep on landing Scatters during Free Spins then you will be spinning those reels for a long time to come!

The presentation of the game is top-drawer as it takes place in a dense green forest with falling leaves and a gentle mist enveloping the ground. You can almost sense the anticipation of war as it is all nice and calm in the forest here until the marching armies arrive of course! Symbols are nicely designed and consist of a Horse, a Soldier, a Lion, a Cannon, along with the usual A – 10 icons. The animations are smooth as symbols fly down the reels in furious fashion and highlight nicely when part of a winning payline. I especially like how when you are close to triggering the highly rewarding Free Spins feature that the reels deliberately slow down to up the tension that bit more as you spin the reels.

The music is atmospheric with a rather brooding tone which compliments the war theme of the game superbly.


Our Verdict on Poltava

This slot comes from ELK Studios and is an action-packed gaming experience that we thoroughly enjoyed. I’ll be honest in saying that I knew nothing of the Great Northern War before playing this slot so fair play to ELK Studios for not only making a fantastic online slot but also a nice history lesson on top of that! Poltava features outstanding graphics, an epic soundtrack, and a whole lot of bonus features to keep you spinning those reels again and again. The Free Spins feature took a bit of time to trigger but the payouts can be huge here especially if you keep on landing more Free Spins with 3 Sticky Wilds present on the reels. Variance-wise, I found this slot to be High so players should expect to sit through quite a few dead spins before eventually landing a big win on the reels. For slots with a similar battle theme, check out Renegades and Ivanhoe.

Lead your army to victory on the battlefield and win a huge cash payout when you play Poltava!