Get ready for an out of this world space adventure in this latest release from leading software studio Play’n GO. This slot focuses on a vigilante space hero aptly called Iron Girl who is on a mission to capture the most wanted villains in the galaxy in order to collect a nice bounty on their heads! To aid Iron Girl, she has a small army of robots at her disposal as well as her trusty suit of armour which will no doubt come in hand for taking down the bad guys. Read on to find out if bounty hunting on the edges of space really is as rewarding as it sounds?

Iron Girl is a 5 reel slot with 20 paylines that includes Villain Respins, Multipliers, and Random Wilds. 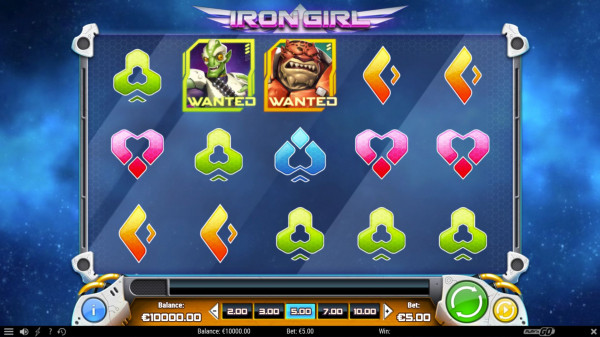 The first feature to discuss is the obligatory Wild symbol which is represented by an image of Iron Girl. This symbol only appears on reels 2, 3, 4, and 5 and similar to most Wild symbols, the main job of this symbol is to replace all other symbols to help comprise winning combinations on the reels.

On each spin, the best winning Villain symbols are held in place and you will be awarded a Free Respin. This is known as the Villain Respins feature. The great thing about this feature is that Respins will continue as long as Wilds or matching Villain symbols appear during a Respin. Villains that become sticky contribute to the Villain collection meter and when the Respins concludes, a Villain Reward will be triggered depending on the number of Sticky Villains collected. The rewards are as follows:

The final feature to highlight is the Iron Armour feature which is a random bonus event that triggers in the base game. Once triggered, Iron Girl will appear on the reels clad in her Iron Armour suit and add between 2 and 5 Wilds to the reels with Wilds now appearing on any reel. This neat bonus feature can also trigger Villain Respins when you form a winning Villain combination.

The presentation of the game is second to none as it features slick graphics, a space-themed background full of clouds and dust, and a very cool interior spaceship design for the reel layout. Symbols are wonderfully rendered onscreen and consist of Iron Girl, 4 Villains, as well as the standard Hearts/Diamond/Clubs/Spades icons which have a space-themed polygon design. The animations are crisp as symbols zip up and down the reels and are highlighted by a sparkling white line of energy when you form a winning combination. In particular, I like when the Iron Armour feature triggers and Iron Girl swoops past the screen in her Iron Armour to add a bunch of Wilds to the reels. It’s a neat visual effect.

The music is atmospheric and sort of light techno. It ties in really well with the sci-fi adventure theme of the game.


Our Verdict on Iron Girl

This slot is made by Play’n GO and they have really knocked it out of their park with this game. Iron Girl is extremely easy to play, features stunning graphics and effects, and enough bonus features to keep you bounty hunting out in space for a long time to come! The Iron Armour feature triggered quite frequently while playing and it’s fantastic that it can add up to 5 Wilds across all of the reels. The Villain Respins feature, on the other hand, took a bit of time to trigger but the rewards are most certainly worth your patience as you can keep on landing Respins one after the other with lucrative multiplier rewards that can go as high as 5X! Variance-wise, I found this slot to be Medium so expect to endure quite a few dry spins before you will begin to see a profitable return on the reels. For slots with a similar sci-fi theme, check out Alien Hunter and Time Warp Guardian.

Capture a bunch of notorious evil villains to win a galactic fortune when you play Iron Girl!