Alien Hunter from Playtech: Slot Review - blast off into space and find those aliens!

Take a trip into space with the alien hunter and capture as many aliens and alien eggs as you can!
alien hunter casino game review jackpot slots playtech slots

This game is all about hunting down some aliens across the universe. You play the role of an alien hunter who looks rather dapper with a handle-bar moustache and a cool fedora hat. Who said you can’t catch aliens in style! The game follows the hunter around in space as he encounters a weird assortment of aliens and it is up to you to help him capture them all.

It’s a 5 reel slot game that has 25 paylines and comes with features including Free Spins, an Alien Egg Bonus, a Spaceman Bonus, as well as a Dollar Ball Progressive Jackpot. 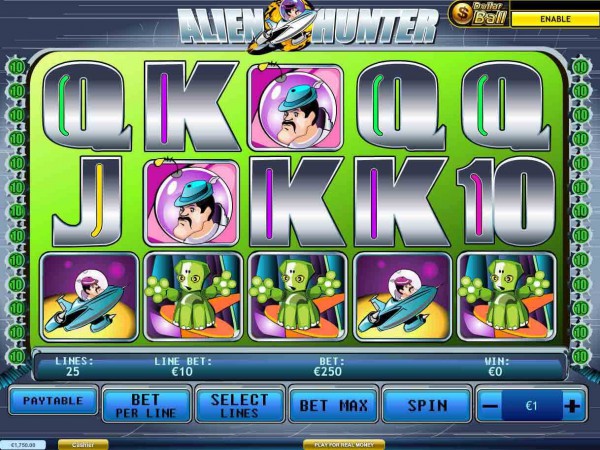 The first feature I noticed while playing this game was the Wild symbol and it is depicted by a dark alien trapped inside a cage. It substitutes for all other symbols except the Scatter, Bonus and Hunting Bonus symbols. It is the highest paying symbol in the game and if you are lucky enough to land 5 of these symbols across the reels then you will be awarded 10,000 coins!

A blue alien egg is the Bonus symbol and if you land this symbol on reels 1 and 5 then you will trigger the Alien Egg Bonus game. In this feature, you will be taken to another screen where you have to pick some eggs and try to avoid a big bad alien that is inside one of them. The eggs will increase your win and if you find the super egg then you will double all your subsequent wins. If you manage to find all of the winning eggs then you can win up to 720 coins. Not a bad prize at all there just for picking some eggs!

An image of the alien hunter is the Hunting Bonus symbol and if you land 3 of these symbols in the middle 3 reels then you will activate the Spaceman Bonus game. In this game, you have two choices to pick from a sharpshooter game and a test your luck game. The sharpshooter game involves clicking on 6 aliens within 15 seconds to increase your win. The test your luck game does not have a timer but the bonus amount is awarded randomly in this game regardless of your shooting skills.

The last feature to mention is the Dollar Ball Progressive Jackpot. This is an optional feature in the game and can be enabled in the top-right of the screen by clicking the “enable” button. It involves playing a lottery type of bonus game that is completely separate from the main game and it comes with many different bonus payouts that include a progressive jackpot. You pick 5 numbers between 1 and 49 and on each spin a new draw will take place. 5 correct numbers will win the jackpot and 4 will win you 1% of it.

The game has a simple and basic presentation and this is probably intentional due to the goofy looking aliens. The background is filled with rather boring grey tones but I do like the layout of the slot as the fonts are very retro and original. The symbols are quite colourful and they swirl along the reels at a rapid pace.

There is no real music to speak of but there are lots of interesting beeps and alien sounds that will keep you amused as you spin those reels.


Our Verdict on Alien Hunter

Alien Hunter is made by Playtech and it’s a crazy trip into space with a hipster kind of alien hunter! It has some nice features that tie into the theme of the game quite well. The Spaceman Feature is the highlight of the game for me and more often than not, I won more playing the sharpshooter game than the test your luck game. If you like your slots set in outer-space then this game was made for you and the fact that you can win a progressive jackpot should draw in plenty of players as well.

Blast off into space with the Alien Hunter!