Hop on a train and visit some of Europe’s finest cultural cities to unleash your inner artist in this exciting new slot from Play’n GO! This game is all about the Graffiti which in most countries is illegal and considered vandalism if done on a property without permission. In some cities such as London, Pairs, and Berlin, there is a thriving culture around this much-maligned art form as they give permission to graffiti artists to display their work on various walls, tunnels, and buildings without fear of prosecution. Join us as we shake up a spray can real good and see if we can find a nice cash prize hidden inside the colourful graffiti? 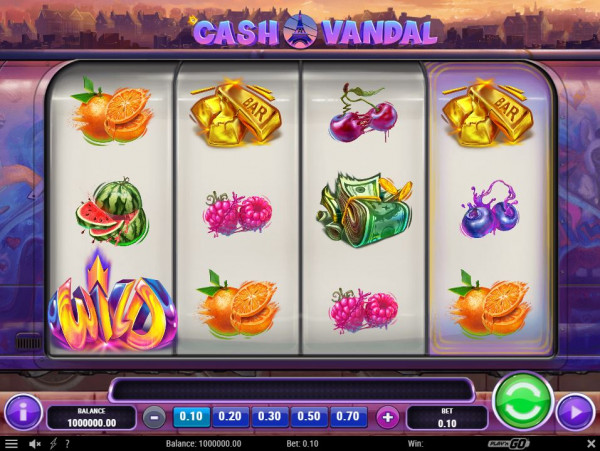 The first feature to highlight is that this slot is the first Play’n GO game to feature 4 reels. It is certainly original and makes it stand out from the vast sea of 5 reel online slots. To form a win on the reels in this game, you need to match 2 or more symbols on an active payline.

The Wild symbol in this slot is represented by the word ‘Wild’ displayed in colourful neon-like graffiti style. It replaces all other symbols on the reels apart from the Scatter to help form winning combinations. Keep your eyes peeled for this symbol when it appears as it is also the highest paying symbol in the game. Land 4 Wilds on an active payline and you will be treated to a fabulous cash payout worth 50X your bet!

Cash Vandal features 2 Scatter symbols which are a Golden Spray Can and a Red Spray Can. If you land the Golden Spray Can symbol on reel 4 and no other Spray Cans land on reels 1, 2, or 3 then you will automatically trigger the Respin feature. In this feature, reel 4 will lock into place while the other reels respin. This gives you the opportunity to land additional Scatters to trigger the other bonus features in the game.

If you land the Golden Spray Can on reel 4 along with one more Spray Can symbol on any other reel then you will trigger the City feature. In this fun feature you get to visit London, Berlin, and Paris where you will receive 1 Free Spin with Stacked Wilds on reel 4 along with an additional reel modifier. The reel modifiers are based on the city you visit and offer the following benefits:

The final feature to discuss is the Free Spins bonus game. This is triggered by landing the Golden Spray Can symbol on reel 4 along with 2 or 3 Red Spray Can symbols on reels 1 – 3. Two Spray Cans award 5 Free Spins whereas 3 will get you 10 Free Spins. As soon as you activate this feature then you will get to choose which city you would like to play your Free Spins in. The neat thing about this rewarding feature is that the City feature occurs on every spin with the Wild symbol also permanently stacked on reel 4. You can also retrigger this feature indefinitely by landing 2 or more Scatters here.

In terms of graphics, this game is packed full of colourful and stylish graffiti artwork as it takes place in front of a train carriage that’s covered from head to toe in it! Symbols are nicely varied and consist of Spray Cans, Various Fruit, as well as Money Clips and Gold Bars. The animations are excellent it has to be said as symbols speed up and down the reels and shine brightly when part of a winning payline. The City feature is a particular highlight as when you trigger it then the train carriage will move quickly to the new city with a new background displayed highlighting the various buildings there e.g. the Eiffel Tower or London Bridge.

The music features a hip-hop style soundtrack which changes depending on the city you are in. It ties in well with the fast-paced gameplay.


Our Verdict on Cash Vandal

Top software provider Play’n GO produced this slot and it is a fun graffiti-led adventure through some of Europe’s most famous cities. Cash Vandal features superb graphics, a catchy soundtrack, as well as a nice set of bonus features to keep you spinning those reels again and again. The Respin feature triggered quite often and lead to a few decent wins but the star and most profitable feature of this slot is the Free Spins bonus game. Here, you can benefit from Synced Reels, Extra Wilds, and Mystery Symbols for every Free Spin thanks to the active City feature. It is also nice that you can retrigger even more Free Spins to help you land even bigger wins. The top prize for this slot is a massive 5,000X your bet which can be won in the Free Spins feature. When it comes to variance, I would say it is quite High so don’t expect to land big wins here too often. For other popular slots made by Play’n GO, check out Golden Colts and Queen's Day Tilt.

Graffiti up a storm to win big on the reels when you play Cash Vandal!