Queen's Day Tilt from Play'n GO: Slot Review - have a royal good time on the reels!

Let the celebrations begin in this entertaining new slot from acclaimed software studio Play’n GO! This game focuses on a famous Queen in Medieval times along with her royal court as they gather together to celebrate and pay tribute to her. In addition to a huge banquet for guests to feast on, the Queen’s royal knights are providing the entertainment by battling it out in an attempt to gain her favour. The final battle is now at hand as a red and blue knight face off on the battlefield with the Queen eagerly watching on as events unfold. Let’s join in the festivities to see if the Queen will share some of her vast fortune with us? 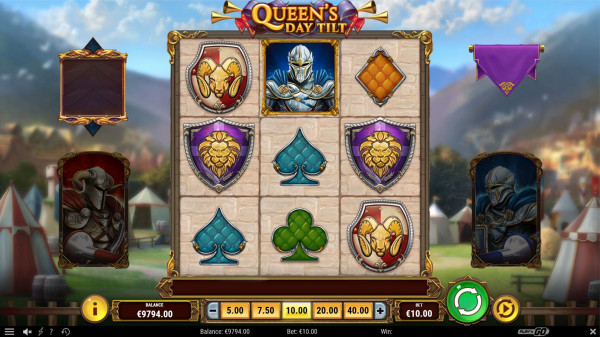 The first feature to discuss is that this game is played on an innovative 3x3 grid which pays out if you match 2 or 3 symbols either horizontally or vertically on the reels. When you do land a win then all winning symbols will disappear to be filled by the symbols above them. No extra symbols are added to the reels so it feels like a quasi-cascading reels type of mechanic. It is a rather simple structure that’s extremely easy to follow and more importantly play.

The Wild symbol in this slot is represented by an image of the Queen herself and substitutes for all other symbols to help form winning combos. It is one of the highest paying symbols in the game as if you happen to land 3 of these symbols on a payline then you will bag yourself a fine payout worth 8X your stake. We should also point out that 1 Wild is created in the middle position of a winning combination of 3 matching symbols that don’t include a Wild symbol. Wild symbols are also removed from the grid if they are the last symbol on it.

Queen’s Day Tilt comes with 2 random bonus features which can occur on any spin in the main game. They are as follows:

If you land a winning combination with both Knight symbols as part of it then you will trigger the Game of Accession bonus feature and be awarded 1 Free Spin. Only the highest paying symbols are present here and you get to choose one of the knights here to win either a nice 2X Multiplier, retrigger Free Spins, or lose where your winnings are collected to exit this feature.

The Free Spins feature is activated by clearing the grid of all symbols or via the Tilt feature as mentioned above. In this fun bonus round, you will be awarded 5 Free Spins with no low-pay symbols appearing on the reels. All Free Spins wins have a nice 2X multiplier attached to them which increases by 1X when winning on both high-paying symbols on the same spin. In addition to this, each non-winning spin will trigger the Ruler bonus feature to give an extra Wild to further boost your chances of landing a big win on the reels. The Tilt feature can also trigger in Free Spins when 1 symbol remains on the grid and if you manage to clear the grid once more then you will retrigger this feature to get an additional 5 Free Spins.

Like most Play’n GO slots, this game features beautiful graphics and a typical highly polished presentation. It takes place right in front of the Queen’s castle with a bright blue sky overhead and looming mountains in the distance. Symbols are expertly designed and consist of the Queen, a Red Knight, a Blue Knight, along with an assortment of Shields and classic Hearts/Diamonds/Clubs/Spades icons. The animations are excellent as symbols are covered with a bright golden glow when part of a winning combination and then proceed to explode in spectacular fashion. It’s a real visual treat for the eyes!

The music is jaunty and playful with an authentic Medieval-style soundtrack. Needless to say, it complements the Royal theme of the game perfectly.


Our Verdict on Queen's Day Tilt

Top software provider Play’n GO produced this slot and it’s the most fun we have had on the reels in quite some time! It features beautifully designed graphics, a bouncy soundtrack, along with the perfect amount of bonus features to ensure you celebrate with the Queen for as long as possible! The grid layout is highly innovative and really adds to the gameplay as you try to clear it from all symbols to activate the special Free Spins mode. Speaking of Free Spins, it can take a good few spins to trigger but stick with it as you can benefit from Increasing Multipliers with only high-paying symbols appearing on the reels to really increase your potential to land a big cash payout. We should also mention that the top prize for this game is an outstanding 5,000X your stake which can be won in Free Spins. In terms of variance, I found this slot to be High so make sure to have plenty of bankroll on hand before attending this party! For slots with a similar royal theme, check out Golden Royals and Royal Spins.

Tilt your way to an epic royal fortune on the reels when you play Queen's Day Tilt!