Seek out ancient Aztec treasure as you explore the depths of a hidden jungle in this new release from popular software provider IGT. In keeping with tradition of previous slot releases from the company, this game was, in fact, a land-based slot machine that became a big hit with players all across the world. To capitalise on its success and huge appeal, IGT decided to create a digital version so that it is even more accessible to players now, especially to those who do not frequent land-based casinos. Without further ado, let’s join Action Jack in the jungle to see if he can help us find a treasure trove of cash prizes on the reels in this slot? 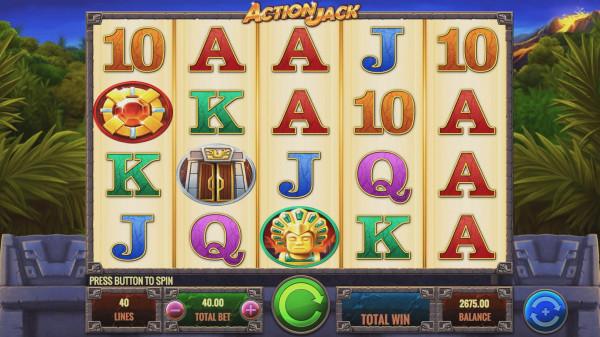 This game features a range of symbols related to treasure hunting in a secluded jungle environment. Symbols include a Gate, a Statue, an Amulet, a Temple, a Map along with classic A – 10 playing card icons. The most lucrative symbol in Action Jack is the Volcano symbol as if you are lucky enough to land 5 of these symbols on an active payline then you’ll be leaving the jungle with a nice cash payout worth 25X your initial wager. We should also highlight that all of the symbols in the game apart from the Scatter symbol can appear stacked on the reels.

The Wild symbol in the game is illustrated by an image of the title character. Like most Wilds, the main job of this symbol is to replace all other symbols apart from the Scatter to help form wins on the reels. It appears only on reels 2 to 5 in the main game.

As touched on already, each reel in Action Jack can include stacks of the same symbol bar the Scatter symbol. Before each spin, a reel set with one of the stacked symbols is chosen at random. The same symbol may pop up in stacks on multiple reels on the same spin. This is known as the Synchronised Reels feature and can be extremely lucrative when matching symbols appear in stacks on two or more adjacent reels.

The Scatter symbol in the game is represented by an image of a Treasure Chest and is used to trigger the special Free Spins Bonus Game. Land 3 or more of these symbols anywhere on the reels to activate this feature. The more Scatters you land then the more Free Spins you will receive complete with a handy multiplier prize. For example, 3, 4, or 5 Scatters will award 3X, 10X, or 25X your wager along with 20, 40, or 60 Free Spins. Moreover, all Free Spins winnings are nicely tripled and if you land 3 more Scatters while in Free Spins then you will retrigger the feature. It is actually possible to retrigger it many times with a maximum limit of 500 Free Spins in total up for grabs here.

To be fair, this game does not feature nicely polished 3D graphics as it is lifted straight from a real physical slot machine which was released many years ago. The graphics are rather dated and cartoon-like as the action takes place inside a dense green jungle with an exploding volcano in the background. Symbols in the game are bright and colourful and consist of Action Jack, a Treasure Chest, a Temple, a Gate, an Amulet, a Gold Statue, a Map, along with classic A – J icons. The animations are neat as symbols burst into life when part of a winning combination. For example, Action Jack will tip his hat to you whereas the Gate symbol will dramatically swing open when part of a win on the reels.

The music is suspenseful as it features loud drums and soothing pan-pipe sound effects. It ties in nicely with the Treasure Hunt theme of the game.


Our Verdict on Action Jack

Acclaimed software studio IGT produced this game and it’s a mildly entertaining gaming experience. It features dull graphics that could definitely do with a fresh lick of paint but does have a nice set of bonus features as its saving grace. For starters, the Synchronised Reels feature can be quite lucrative especially when you get full stacks of matching symbols on more than 2 adjacent reels. The main attraction though is the Free Spins bonus round as it is here where not only can you benefit from 3X multipliers on all wins but also have the chance to win the top prize which is a whopping 3,000X your bet! Variance-wise, this slot is Medium so you will find that wins occur more frequently the more you play. For slots with a similar Treasure Hunt theme, check out Ecuador Gold and Lost Relics.

Discover a horde of ancient treasures on the reels when you play Action Jack!