Lost Relics from NetEnt: Slot Review - lost in time but not for long!

Enjoy adventure, a dab of archaeology, and looking for hidden treasure? Then you are in luck as this new release from leading software studio NetEnt ticks all those boxes! Get ready to accompany a Lara Croft-inspired adventurer as she works tirelessly on an excavation site in an ancient Roman city searching for relics that have been lost to time. So have your trowel and flashlight at the ready as we venture forth deep inside the ruins making sure to keep an eye out for the all-important hidden treasure chests that are buried everywhere in this top online slot. 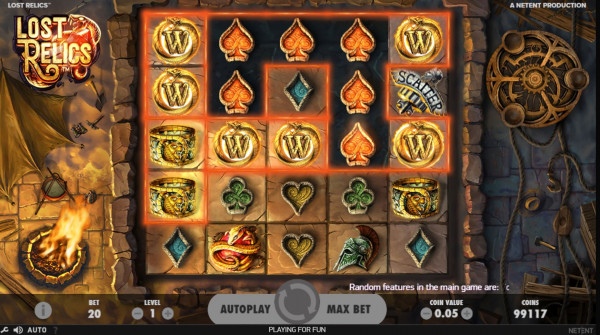 The first feature to highlight is that this game uses the Cluster Pays engine which means you need to form a cluster of 6 or more identical symbols in order to land a win on the reels. Symbols are only considered part of a cluster if it is adjacent either horizontally or vertically to the same symbol. This payline-less system is similar to other NetEnt slots such as Aloha! Cluster Pays.

When you land a win in this game, up to 5 instances of 3 random features in any combination may trigger after the reels stop, but before any wins are paid out. These features include:

The Scatter symbol is represented by a Roman stone banner and only appears on reels 1, 3, and 5 in the main game. Land 3 Scatters on the reels to trigger the Free Spins bonus game. In this feature, you will be awarded 10 Free Spins and a hidden treasure chest that varies in size will occupy a number of spaces hidden behind the reels. When you form a winning cluster, the winning symbols will reveal parts of the hidden chest. Manage to reveal the whole treasure chest and you will be awarded a combination of the following:

Once a chest has been uncovered, the tiles will then be replaced and you will need to land more winning clusters to reveal more chests. There are 3 types of chests ranging from small to large with the largest chest offering the biggest prizes. Usually, the first chest you will uncover will be small or medium but keep finding chests in Free Spins and you will eventually find the largest treasure chest on the reels.

The graphics are visually stunning as it offers a top-down view of a dusty excavation site. You will notice a campfire to the left of the reels illuminating the symbols to create flickering shadows on the reels. It’s a neat touch. Symbols are intricately detailed and consist of a range of lost artifacts such as Rings, Helmets, Daggers, Ruby Snakes, and your typical Hearts/Spades/Diamonds/Clubs icons. The animations are impressive as symbols glow brightly and are covered in an orange frame when part of a win. I also enjoyed how the symbols crumble and break whenever you trigger one of the random bonus features.

The music is upbeat, atmospheric, and quite catchy. It complements the fast-paced gameplay superbly.


Our Verdict on Lost Relics

This game comes from software giants NetEnt and is a highly enjoyable dig around an ancient Roman city! As you might expect with it being a NetEnt game, the presentation is second to none with spectacular graphics and animations and is super easy to play once you get going. The bonus features are nicely varied and trigger quite frequently the more you play. The most rewarding feature by far is the Extra Wild feature as it’s possible to land up to a massive 15 Extra Wilds if the reels are kind enough to you. Revealing the Treasure Chests in the Free Spins feature is great fun but it can take a good bit of time to reveal the largest Treasure Chest on the reels. Variance-wise, I found this game to be Low so you will win plenty of cash payouts but they tend to be on the small side. For slots with a similar hidden treasure theme, check out Rich Wilde and the Book of Dead and Treasure of Tombs Hidden Gold.

Embark on a rewarding archaeological adventure when you play Lost Relics!