Wonder Woman from NextGen Gaming: Slot Review - defend the earth against Ares and a skeleton horde!

This game revolves around Diana Prince otherwise known as the Amazonian warrior Wonder Woman. This superhero hails from Themyscira and she has superhuman strength, can fly, is a master hand-to-hand combatant and is more than a match for most villains in the DC universe. Wonder Woman came to prominence back in the 1940s when she debuted in All Star Comics but it was when the TV series starring Lynda Carter came out in the late 1970s that the character really took off and became a global icon. A new movie based on the character is going to be released soon and this will bring Wonder Woman to the eyes of a whole new audience.

The game is a 5 reel slot with 50 paylines and it includes Wonder Wild Free Games and an Ares Showdown feature. 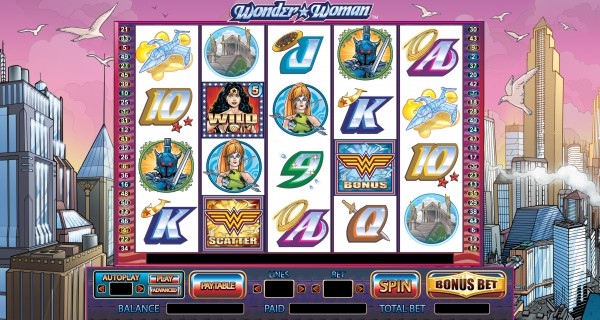 The first feature to mention is the Wild symbol and this is denoted by an image of Wonder Woman. It substitutes for all symbols except the Scatter symbol and it will only appear on reels 2, 3, 4, and 5. The nice thing about this symbol is if it forms part of a winning combination then you will receive a double payout.

If you land 3 or more Wild symbols then you will trigger the Wonder Wilds Free Games feature. In this game, you will be awarded 8 Free Games and Wonder Woman will add Wonder Wilds to the reels randomly. These Wilds will stay in place for up to 5 spins and all wins in this game are doubled so make sure to make every free game count if you want a nice payout!

The Bonus Bet is activated by pressing the Bonus Bet button. It makes the total bet 50 lines plus 10 extra coins. You need to use the Bonus Bet along with landing 3 or more Scattered Logo symbols on the reels in order to activate the Ares Showdown feature. The Scattered Logo is depicted by the Wonder Woman logo. In this feature, Wonder Woman must battle skeletons and Ares over the course of 3 rounds. If you manage to successfully attack Ares 3 times then you will receive a fantastic 100X multiplier! The only downside to this great little mini-game is that it cannot be triggered during the Free Games feature.

The game looks like it popped right out of a comic-book so comic-book fans are in for a real treat when they play this slot. There is a wonderful skyscraper backdrop and it is filled with a nice violet glow. The symbols consist of Wonder Woman, Ares, a Greek Temple and even Wonder Woman’s famous invisible plane! The animations are nice, especially when a Wild symbol forms part of a winning combination as Wonder Woman uses her indestructible bracelets to deflect some bullets.

There is no real music to speak of but there are lots of interesting beeps and sounds as you spin the reels in the game.


Our Verdict on Wonder Woman

Wonder Woman is produced by NextGen Gaming and it’s a really enjoyable slot to play. The presentation of the game is flawless and it has some really interesting features that provide hours upon hours of entertainment. The Ares Showdown Feature is the main highlight of this slot as you get to see Wonder Woman fighting in all her glory. The only downside of this slot is that you cannot retrigger more Free Games in the Free Games feature.

Stop Ares from taking over and the world with Wonder Woman!