The game’s software runs smoothly, with all options, including ‘bet max’ and ‘auto play’, loading quickly. The paytable button is prominently displayed below the reel, once a player clicks on it, he receives descriptive and well-structured information on how to win some serious cash in this online slot machine. But let’s move on to the most exciting aspects of this slot game. Which Tower? And what’s the Quest about? 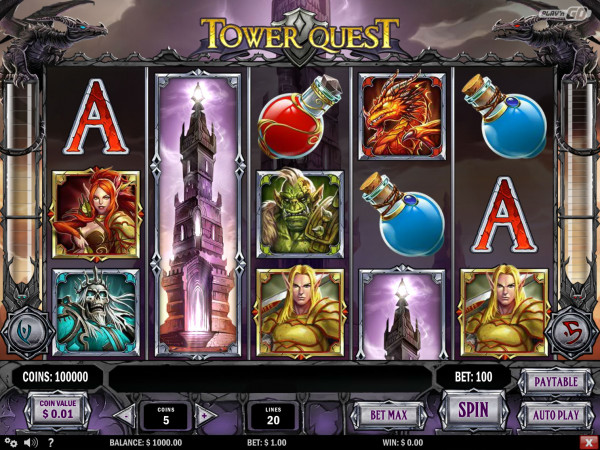 The idea behind this slot game is you, as the player, battling against angry dragons and scary orcs. To help you achieve this goal, Tower Quest has several bonus features. Among my favourites is the bonus feature, which allows a player to win up to 500 times his stake - for obvious reasons!

To get redirected to this interactive game, a player needs to collect at least three Evil Wizards on reels one, three and five. Fittingly for an online casino game, a player needs to play a card game against the evil wizard. This entails rolling a dice to determine which card is played. It’s all about scoring higher than the wizard and subsequently destroying his health meter entirely. With every step you take, every time your card outplays his card so to speak, a cash prize is awarded to you. To spice things up, Play n’Go designed Tower Quest so, that in the case of you and the wizard receiving the same number, a special attack unfolds. Next, there is another special feature within the bonus game. The same number on all three dices triggers super powers, which doubles the value of your card.

This bonus feature is exceptional in terms of its potential returns. As such, this exciting feature stands somewhat in contrast to the otherwise fairly standard features (e.g. free spins).

Tower Quest is a game developed by Play'n GO. Upon first glance, the slot game seems rather standard with its 5 reels and 20 paylines. Its design is also arguably typical of slot machines and is best described as a clash between fantasy and mythology. The purple sky for a background and the stony grey of dragon statues adds to the dark theme this online game embraces.

This online slot is available just for fun, as well as for real money. Given that this online slot is a break from some of the fairly monotonous slots on the market, Tower Quest can indeed be worth a spin just for fun. However, given that the odds are relatively good in this online game, it sure is worth a gamble too. The stake starts at 0.20, which makes it very affordable. Given that the bonus game comes with the possibility of a super-generous 500 times a player’s stake, it can pay off to invest a little more in this slot game. A max bet, however, may only be suitable for those players seeking extreme thrill, or those who simply can afford to lose a good chunk of cash in one go.

Our Verdict on Tower Quest

This slot game is one of Play'n GO's best titles. Well, at least, if you are into online slots that aren't super complex but offer some exciting bonus features, which can also be profitable. Tower Quest does precisely what its name indicates, it offers an adventure. The bonus game is a great interactive feature, which allows the player to engage with the game, and (with a little luck) beat the evil wizard, and reveal massive winnings.