If you have read the review on Thunderstruck I, I needn't mention that this slot machine isn't about AC/DC. In fact, there is no need to tell you. Once you click on the game and it loads, you are presented with Thunderstruck II. The game's graphics give its warrior theme away. To be precise, this slot game is about Norse mythology. Playing the game, you will soon realise that one of the major stars in the game is Thor, the hammer-wielding god.

First things first, a sequel to a classic slot game always indicates that the original is highly popular and that players want more of the same kind. Frequently, however, this doesn't work out and players are presented with a newer game, which doesn't satisfy their high expectations. Not so, with Thunderstruck II by Microgaming – at least, in terms of the first impression it makes. 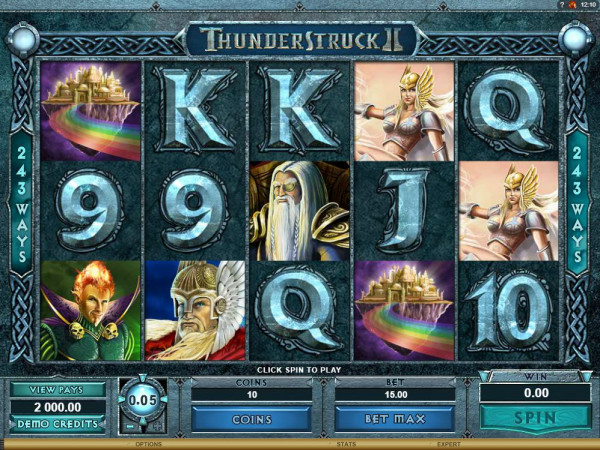 Now, on to the features. Again a comparison is called for. With many of the original features implemented in this slot machine, there is little to criticise – only, to praise.

In Thunderstruck II, Microgaming made a pretty special feature available to players. This feature is called WildStorm and appears at random. As such, it is a great addition as it does not require players to receive any specific combination of symbols to unlock it. What the feature does will most likely convince you that, WildStorm is also a pretty profitable addition. It gives you a combination of free spins and expanding wilds. This heightens your odds at winning a good chunk of casino coins immensely. The best part of this feature is, however, the graphics which go along with the slot machine, when the feature is triggered. Lightning erupts, and Thor appears. This is done really well, the only pity is that you need a good bit of luck to get this feature – this, however, is understandable, given that it complements a great array of bonus features in Thunderstruck II.

The slot machine has been improved in terms of its graphics, the symbols and general design are much more sleek, subsequently also much better for players' eyes. While old school slot fans might prefer Thunderstruck, in my books Thunderstruck II certainly is an improvement on its predecessor.

Frankly, Microgaming's Thunderstruck II is best played on relatively low bets, or for a better description, bets that allow you to play the slot machine for a prolonged time. It is after all primarily through the bonus features, which may not activate with the first spin, that serious money in this game can be made, and stakes multiply many times.

To get a better feeling for the slot machine, I would recommend that players first try the game in fun mode, which is available in most online casinos, where the game is hosted. The mute button, despite being a valuable option in many slot machines, rarely gets any use in Thunderstruck II as the tunes really add to the game.

Our Verdict on Thunderstruck II

You guessed right, my verdict is positive. Thunderstruck II is a great successor to the original slot game, Thunderstruck. Microgaming kept the features that people loved so much about the original and added ones that are innovative and can keep up with modern games. After all, players do get used to the latest technology, and classic slots can for that reason often appear a little date. The creation of Thunderstruck II was certainly a very smart move!