The Phantom of the Opera from Microgaming: Slot Review - let your fantasies unwind!

The classical musical comes to the online slot world for the first time!
casino game review microgaming slots the phantom of the opera

The Phantom of the Opera is a famous novel written by French writer Gaston Leroux and published all the way back in 1909. The book was elevated to the mainstream when legendary English composer Andrew Lloyd Webber transformed it into a world-famous musical in 1986. The story focuses on a young and talented singer named Christine who becomes an obsession for the Phantom of the Opera who is a mutilated musical genius who lives in the catacombs of the opera house where she sings. This latest Microgaming release focuses on the hit movie that's based on the musical and was released in 2004 so fans could enjoy the smash hit musical on the big screen.

The Phantom of the Opera has 5 reels with 243 ways to win and comes with features such as Chandelier Bonus, Letter Bonus, Free Spins, Dancing Wilds, and a Masquerade Bonus Game. 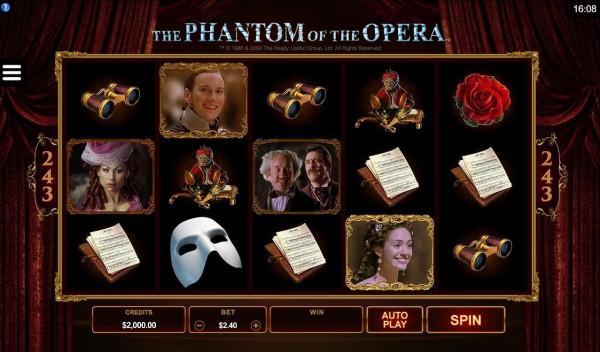 Top Casinos for The Phantom of the Opera

More Top Casinos for The Phantom of the Opera

The first feature to highlight is the Wild symbol and it is illustrated by the Phantom of the Opera game logo. Like most Wild symbols, it substitutes for all other symbols except for the Scatter and Letter symbols to help form winning combinations. A nice feature of this symbol is that it can come double stacked on the reels. The Phantom, Christine, and Raoul symbols also come double stacked which really enhances your chances of landing a big win.

In terms of bonus features in the main game, The Phantom of the Opera has two. The first one is the Letter Bonus feature which triggers when the Letter symbol appears anywhere on reel 5. This will then reward you a nice payout of up to 20X your total bet. The second feature is the Chandelier Bonus and when this triggers, a chandelier will randomly drop on any base game spin to turn up to 3 reels fully Wild.

The Scatter symbol is represented by the Phantom’s white mask and if you land 3 or more of these symbols on the reels then you will trigger the Feature Selection Screen where you get to choose one of the following three Bonus Games:


Best Welcome Bonus for The Phantom of the Opera

More Bonuses for The Phantom of the Opera

The game is beautifully presented on screen and the graphics are superb which is what you would expect from stellar software producer Microgaming. The backdrop of the slot features some lavish red theatre curtains and a brightly lit stage. Symbols are pictures taken straight from the movie and include the Phantom, Raoul, Christine, Gilles, Richard, Carlotta, as well as an assortment of objects such as a Rose, Binoculars, a Book, and a Monkey. The reels run along nice and smoothly, and there are some very impressive animations when you form a win as symbols burst into life as they flash and sparkle brightly.

The music is stirring and orchestral as it is taken straight from the original soundtrack of the movie. It is wonderful to listen to as you play the game and it really is some of the best music you will ever hear in any online slot!


Our Verdict on the Phantom of the Opera

Microgaming produced this game and I am happy to say that it is a fine tribute to a much-loved musical. It features a very stylish presentation which makes it very appealing to play. The game is chockful of fantastic features which will provide you with countless hours of entertainment. The key to winning big in this game definitely comes from triggering the 2 Free Spins features as you can earn huge multiplier wins and massive 2x2 Wild symbols on top of that. Lastly, I found this game to be of Medium variance so you’ll find that wins are evenly distributed the more you play.

Rewards wait behind every mask when you play The Phantom of the Opera!