GamingRevolution has reviewed the Microgaming's popular progressive slot jackpot game. The review highlights the main features, including the multiplier and wild symbols, and reaches the verdict that this online game is a must-play for fans of jackpots - and, sure, who isn't?
casino game review microgaming slots the dark knight

This isn’t the first batman-themed slot to be released by Microgaming. Yet, it might be the best one with its 243 different possibilities to win, and as part of the Mega Moolah jackpot network. The latter means that players of this progressive slot game can win at least 1,000,000! 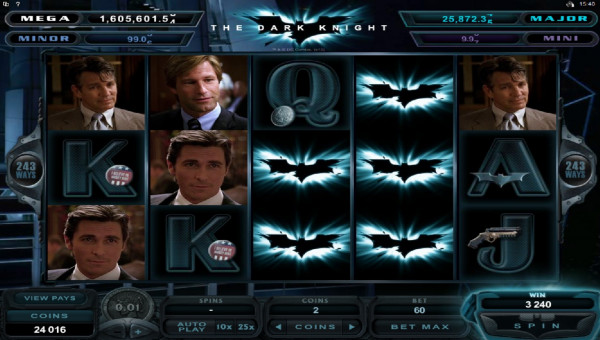 Both Batman and Joker can appear on the reel and award several bonuses. Among these bonuses, is an instant prize bonus, which can amount up to 150 to 1500 coins, a wild reels bonus, which turns three reels wild, and my favourite, the win multiplier. This multiplier at least doubles the winnings and at the most quintuples them. If you have a little in the bank, then this bonus is really welcome.

Given that this game is a progressive jackpot game, the favourite feature in the game is the Mega Moolah Bonus. Some lucky player is sent to a second stage, can either select Batman or Joker, then the wheel spins and the winnings are based on which segment is highlighted. If a player hits the jackpot, he sure will cash in.

There is little negative to note about The Dark Knight slot game. However, the dark background, while it is super easy on the eye, may not be the most cheerful theme. That, however, is clearly intentional.

On first glance, little disappoints. The Dark Knight stood at several million, as I began this review. The design is sleek, the game loads fast and certainly appeals to fans of the 2008 movie, starring Christian Bale and Heath Ledger. So far, so good.

Players will first notice that each time a spin is triggered, the background turns into a short clip from the movie. This is pretty impressive, though can be irritating after several rounds. If that is the case, switching the cinematic spin-off is an option. Personally, I would do so, after few spins.

Our Verdict on The Dark Knight

The Dark Knight is quite the spectacular production by Microgaming. Some of the features are almost too impressive. For example, the cinematic spin. This game certainly is a must-play for players, who love the thrill of playing for the big jackpot.