Terminator 2 from Microgaming: Slot Review - another great slot in honour of a great movie

Arnold Schwarzenegger famously said 'I'll be back' in Terminator 2. We sure will be back to this online slot game, with its free spins and multipliers.
casino game review microgaming slot machine slots terminator 2

The first impression this video slot gives players is that it’s much more than simply a game. It’s an entertainment experience with 5 reels and 243 ways to win. 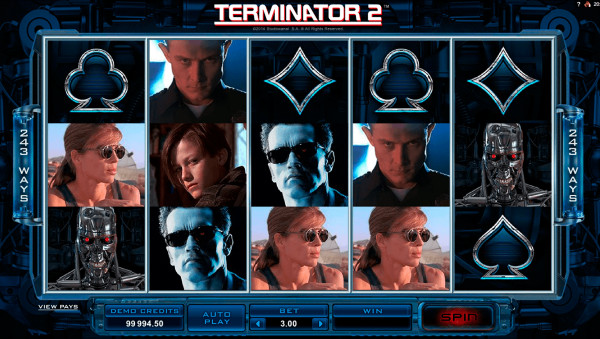 The free spins feature in Terminator 2 is pretty decent. A player gets 10 free spins. Even better though is the T-800 vision feature. This feature redirects players to the Terminator viewpoint and you can scan for the target. The T-1000 symbol will give you the greatest win. Furthermore, it will substitute part of the winning combination in free spin rounds for a different symbol, so that you will get the most lucrative combination possible. This feature really is brilliant as it guarantees that a player gets the absolute maximum in these rounds.

Having noted elsewhere that the graphics are great (and they really are!), it’s nevertheless noteworthy that some players may find the design a little dark. This, however, is entirely up to preference. Assuming that most players will be familiar with the movie, it should be received positively among most players, though.

It’s what I expected: When I first heard about Microgaming’s Terminator 2, I expected a game based on the movie of the same name. The movie with the famous Arnold Schwarzenegger line: 'I’ll be back'. Just like the movie, the slot game has excellent graphics, a great soundtrack and even features scenes from the Terminator 2 movie.

This game is a medium variance game. The winnings in Terminator 2 are generally quite big but don't come by that easily. For that reason, it may not be recommendable to play with all too much money. It's better to make your money last for several rounds and, hopefully, win big in Terminator 2.

Our Verdict on Terminator 2

Is it 'I’ll be back' or 'Hasta La Vista, Baby'? Frankly, I think this Microgaming online slot will have most players coming back for more. The movie theme adds to the enjoyment of the online game. As noted, players will soon find that the winnings in Terminator 2 tend to be bigger than in many other slot games of the same style.