Temperance from Microgaming: Slot Review - dive in to win big!

Enter a dystopian steampunk-inspired world deep down on the ocean floor in this new online slot from software studio Old Skool Studios in collaboration with Microgaming. This game is clearly influenced by the hugely popular video game Bioshock as it features similar looking characters, graphics, and not forgetting of course, a very big robot! The idea behind this underwater city is that it was built to protect society from temptation but something fishy appears to be going on, so it’s up to the two main heroes and their trusty robot to investigate. Let’s accompany them on an epic underwater adventure as they explore the city inside and out and hopefully they will find a nice cash prize to reward us with along the way!

Temperance is a 5 reel slot with 20 paylines that comes with Free Spins, Stacked Wilds, a Gamble Mode, and a Survival Bonus feature. 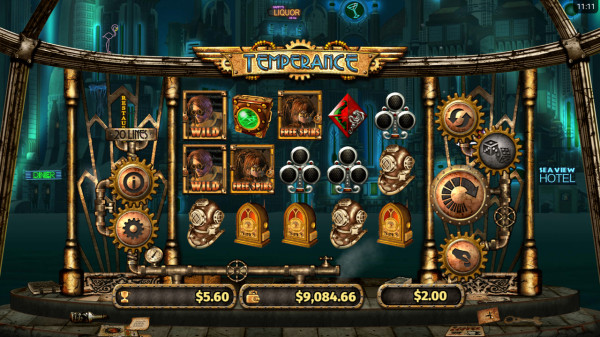 The first main feature to highlight is the Wild symbol which is represented by an image of the male hero. Similar to most Wild symbols, the Wild substitutes for all other symbols except the Scatter and Bonus symbols to help form winning combinations on the reels. Make sure to keep a close eye on this symbol as it is the most valuable symbol in the game. For example, land 5 Wilds on a winning payline and you will bag yourself a fantastic cash prize worth 1,000 coins!

The Bonus symbol is illustrated by an image of the massive robot. Land 3 of these symbols on reels 1, 3, and 5 to trigger the Survival Bonus feature. In this excellent pick-me style mini-game, you are taken to a new screen where you enter a bunch of underwater tunnels to pick objects to reveal prizes. There are 5 levels in total in this game and in order to advance a level, you must correctly pick the ‘Win All’ or ‘Advances’ objects. Naturally, as you progress through the various levels, the rewards become even bigger. This feature ends when you reach the final level or when you pick the ‘Collects’ object.

The final feature to mention is the Gamble mode. This is optional and is triggered whenever you land a win on the reels. It gives you the chance to double your winnings by picking either a red or blue relic. When you choose a relic, a fun pinball game will start and a ball will then land in either the red or blue relic. It is possible to gamble up to 5 times in a row. Be warned though as if you pick the wrong relic then you will lose all your current winnings and be taken back to the main game with two very empty pockets!

Temperance evokes a real steampunk vibe and borrows heavily from the hugely popular Bioshock video game. The game features a slick and very polished presentation as it takes place in a vast underwater city full of neon-lit signs, bars, restaurants, and there is even a police station too. Symbols are expertly designed and consist of the Two Heroes, a Robot, a Sonar Device, a Radio, a Diver Helmet, Bottles, and your typical Hearts/Spades/Diamonds/Clubs icons. The animations are a real visual treat as symbols are surrounded by bubbles of water when part of a win and when you are lucky enough to land a big win then the screen is splashed with an assortment of shooting blue stars.

The music is beautiful as it features the iconic La Mer song from Charles Tenet which ties in perfectly with the steampunk style of the game.


Our Verdict on Temperance

Temperance is created by Old Skool Studios in association with Microgaming and is one of the best steampunk online slots that we 've ever played. The graphics in this game are absolutely stunning and when accompanied by the legendary La Mer song, it is quite the gaming experience we can tell you! The bonus features are nicely varied and I was able to trigger the Survival Bonus game quite a few times while playing although it was quite tricky to make it to the final level. The most rewarding feature in this slot is the Free Spins bonus game since you have Stacked Wilds, 10X Multipliers, and you can also retrigger additional Free spins on top of that! Variance-wise, I found this game to be Medium to High so don’t expect to get wins on every spin but when you do then it's definitely worth your while. For slots with a similar steampunk theme, check out Fortunium and Gold Factory.

Seek out a vast fortune way down on the ocean floor when you spin the reels in Temperance!