Spin Sorceress by NextGen Gaming is a great slot game. Not only its skilfully developed graphics stand out but also its SuperBet feature, which multiplies winnings up to 50 times.
casino game review nextgen gaming scientific games slots spin sorceress

Spin Sorceress greets players with 5 reels and 243 ways to win, on both desktop and mobile. Powered by SuperBet technology the game loads super fast, and never lags. 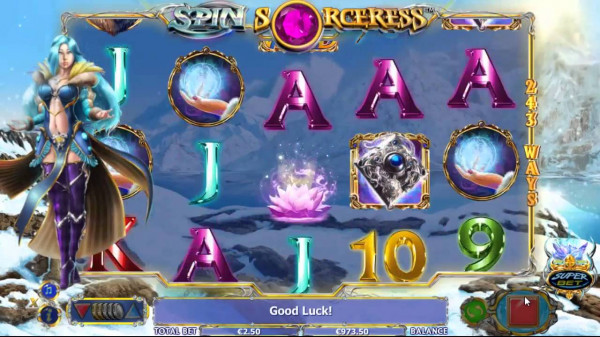 Players of NextGen Gaming slots love that the so-called SuperBet forms part of most games. This feature is a multiplier, which can be played on a chosen number of spins. When activated, this feature can give players 50 times the amount of every win, when activated. Even the SuperBet level can be chosen by players. It depends on whether a player is feeling risky or not. Playing with 500 coins will result in either a 20, 30 or 50 times multiplier. Level 1, played with 50 coins, on the other hand, results in two-fold, three-fold of five-fold winnings.

Unlike the many other great features of Spin Sorceress, this feature makes games by NextGen Gaming stand out. The Wild reels feature is a great extra that features in many modern slot machines. The free games feature, which can get players up to 20 free spins, further adds to Spin Sorceress' overall impression of a game with a potentially profitable bonus features.

The game delights with a bright background, snow-capped mountains and a faith glimmer of a blue sky. This is not only a fitting background for the mythical themed game but great for tired player eyes!

The focus is on the SuperBet levels players can choose. As noted above, this is subject to gaming behaviour. Risk-averse players still enjoy high earnings, so it isn't wrong to advise against playing at a high level. Yet, with level 1 giving players fairly good multipliers, playing at a low level can be profitable as it is.
Best to test this slot out first, and then decide on how you feel about upping your stakes.

Our Verdict on Spin Sorceress

What a charming game! The odds are relatively normal, yet chances of cashing in serious money via the multipliers are also given. Neither graphics nor sound effects (which are fairly relaxing) can be faulted, and the ease when using NextGen Gaming software makes Spin Sorceress a great slot game to play.