Rainbrew from Just For The Win: Slot Review - a taste of luck!

Visit a magical brewery located at the end of a rainbow and run by two cheery leprechauns when you play this amazing slot.
casino game review just for the win microgaming rainbrew slots

Ireland is an extremely popular theme that's been explored by countless software developers in the past as it's said to be a lucky place full of magical leprechauns and colourful rainbows. This new title from Just For The Win in association with leading software provider Microgaming is yet another one to add to the growing list but with one exception as it takes place in a leprechaun’s brewery at the end of a rainbow! The brewery is run by two happy-go-lucky leprechauns who have concocted a special magical rainbow drink that’s said to taste out of this world! Join us as we visit the brewery to see what cash prizes might await us inside?

Rainbrew is a 5 reel slot with 243 Ways to Win that includes Free Spins, Increased Ways to Win, Expanding Wilds, and Horizontal Wilds. 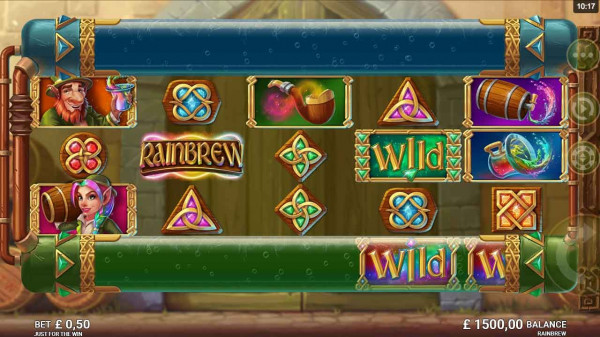 The first feature to discuss is that this game is played on a unique 3 x 5 x 5 x 5 x 3 layout which is something not seen in your average online slot. Rainbrew also features a massive 243 ways to win where wins are paid out when you land 3 or more of the same symbol in succession in any position on the reels from the leftmost position to the right.

Rainbrew comes with a highly innovative Sidewinder feature which makes good use of the various Wild symbols. For instance, when a Top Wild activates the horizontal reel then the number of ways to win increases from 243 to 576 and if you activate both horizontal reels then you will increase the ways to win to a whopping 1,125! With so many ways to win, you’ll be sure to land lots of cash payouts quite quickly!

Keep a close on the reels during the excellent Free Spins bonus feature as if a Regular Wild stops on the same position on both horizontal reels then it will proceed to expand covering the reel in-between them with Regular Wilds. This can lead to 3 fully Wild reels on each Free Spins. If you manage to do this then you will take home the top prize worth 2,720X your stake! Lastly, whenever a Scatter symbol lands during Free Spins then you will be awarded 1 Extra Free Spin.

The presentation of the game is superb as it takes place inside of a mystical brewery that features a large wooden door and lots of kegs on the floor. The Sidewinder tubes which you will notice at the top and bottom of the reels are filled with magical green and blue liquids which no doubt are key to creating some delicious Rainbrew! Symbols are nicely polished and consist of a Male Leprechaun, a Female Leprechaun, a Pipe, a Mug, a Keg, along with an assortment of different coloured Celtic designs. The animations are wonderful as symbols speed up and down the reels and are highlighted by a bright neon-like square when part of a winning combination. It’s really fun to see the Wild symbols zip by in the Sidewinder tubes as they massively increase your ways to win.

The music is jaunty and playful with a distinctly Irish flavour. Naturally, of course, it ties in perfectly with the Leprechaun theme of the game.

This highly entertaining game comes from Swedish-based developer Just For The Win and is published by Microgaming on their Quickfire platform. Rainbrew stands out from a sea of Irish-themed online slots mainly because it is based in a brewery at the end of the rainbow! Aside from that, this slot features beautiful visuals, a toe-tapping soundtrack, and just about the right amount of bonus features. The horizontal reels ensure the excitement levels stay up and it’s just fantastic you have the chance to increase the ways to win to 1,125 here. The most rewarding feature by far is the Free Spins feature as it too is played with an incredible 1,125 ways to win but you also have the chance to land 3 fully Wild reels on each Free Spin. In terms of variance, I found this slot to be Medium so you will find that wins are evenly distributed the more you play. For slots with a similar Leprechaun theme, check out Rainbow Riches and Finn and the Swirly Spin.

Discover a giant pot of gold at the end of the Rainbrew when you play this excellent slot!