Team up with Ahab a grizzled sea-captain who is on the hunt looking for a huge white whale called Moby Dick.
casino game review microgaming moby dick rabcat gambling slots

Moby Dick is a famous novel written by American author Herman Melville and published in 1851. It centres on the quest of an obsessive sea-captain called Ahab who is on the hunt for a massive white whale known by sailors as Moby Dick. Ahab is on a quest to meet this huge marine mammal once more as the last time they met, Moby Dick took a big chunk of his leg! The whole story is narrated by a sailor called Ishmael. Rabcat Gambling decided to release a game based on this classic book to recreate this epic tale as an exciting online slot.

Moby Dick has 5 reels with 25 paylines and comes with a Freezing Feature, Free Spins, and a Gamble Mode. 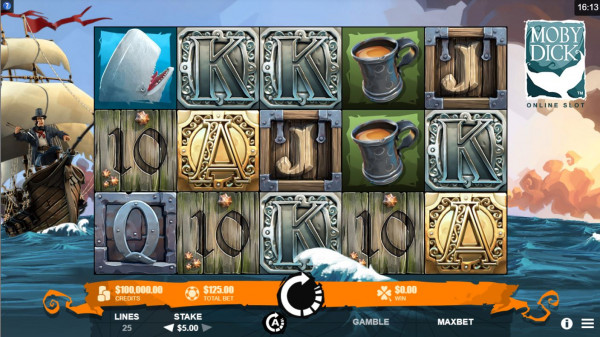 The first thing to highlight is the Wild symbol and this is illustrated by a ship’s wheel. Like standard Wild symbols, it substitutes for all symbols except for the Scatter to help form winning combinations. This symbol along with the Moby Dick symbol is the highest paying symbol in the game. Land 5 of these symbols on an active payline and you’ll be jumping up and down on deck with a payout of 200X your total wager!

Every time you create a winning combination or receive 3 or more Scatter symbols, the symbols will lock into place and award you a free respin. This is known as the Freezing feature. A nice benefit of this feature is that respins can keep on going as long as a Wild or matching symbol is added to the original symbols displayed on the reels. If no new Wild or matching symbols occur then the feature ends and you are awarded a payout.

The Scatter symbol is denoted by Moby Dick’s mouth. If you land 4 or more of these symbols on the reels then you will trigger the Free Spins feature. The more Scatters you land then the more Free Spins you’ll be awarded. For instance, 4 Scatters give 10 Free Spins, 5 give 12 Free Spins, and if you land 7 or more then you’ll be given a fine set of 20 Free Spins. During this feature, up to 3 Wilds can appear on reel 3 which boosts your chances by some margin of landing a big win. It is also possible to trigger more spins by landing more Scatters during Free Spins.

The final feature to discuss is the Gamble Mode. This is an optional feature which triggers when you land a win on the reels. It involves picking from a silver and a copper teacup. Guess correctly and your winnings will be doubled but if there is a fishbone in the cup then you will lose your bet and be taken back to the main game. It is possible to gamble up to 5 times while in this feature or until the maximum gamble winnings reach 10,000 coins.

The graphics are absolutely outstanding as it features some amazing 3D effects and stunning artwork. The game takes place out at sea with Dawn breaking through on the horizon and you’ll notice Ahab readying his spear as he perches on the bow of the Pequod to the left of the reels. Symbols are intricately detailed and consist of Ahab, Moby Dick, an Anchor, a Tankard of Ale, a Ship Wheel, and the standard A – 10 icons. The animations are a real highlight as rolling waves pass by the reels constantly and if you look closely at the waves you will even notice the fearsome Moby Dick appear on occasion. I also liked how the game takes you to a new screen for the Gamble feature but it's no fun picking a fishbone out of a teacup I can tell you!

The game features lots of seagulls squawking and calming sounds of rolling waves. It complements the sea theme of the game perfectly.


Our Verdict on Moby Dick

Stellar software studio Rabcat Gambling in partnership with Microgaming produced this fine-looking slot. It is simply stunning to look at and features some of the best graphics I’ve ever seen in an online slot. Not only does it feature some amazing artwork but it also contains a nice set of bonus features that will have players spinning the reels again and again. The Freezing feature keeps the excitement levels up as you play the game and there are plenty of Free Spins to go after as well and it is great you can retrigger even more of them. I really enjoyed the risky Gamble mode but make sure to be extra careful to avoid picking out a fishbone from your chosen cup of tea! I found this game to be of Medium variance so you’ll find that wins are evenly balanced the more you spin the reels.

Find Moby Dick to bag yourself a massive cash prize!