MegaJackpots Monopoly from IGT: Slot Review - the family game with a bit more to play for

MegaJackpots Monopoly by IGT is an outstanding slot game with a progressive jackpot. We reviewed the game for you, to provide you with information on how profitable this slot game can be and how players can enter the game, and be in with a chance on the jackpot from the IGT progressive network.
casino game review igt megajackpots monopoly slot machine slots

To date, IGT has developed several online games based on board games. None, though, could be more fitting for a slot game, which flaunts the possibility of massive wins, than Monopoly.

The aim in Monopoly, the board game, is it to build a property empire and bankrupt each other. Of course, the slot version of the game does not come with the same competitiveness, nevertheless, the progressive jackpot adds an interactive feature, which allows players to be in direct competition with their fellow players. Furthermore, the original board game's popularity is also down to its great design. Its dollar-green board, colour-coded streets of houses and its expertly-designed jail, all form part of the game. 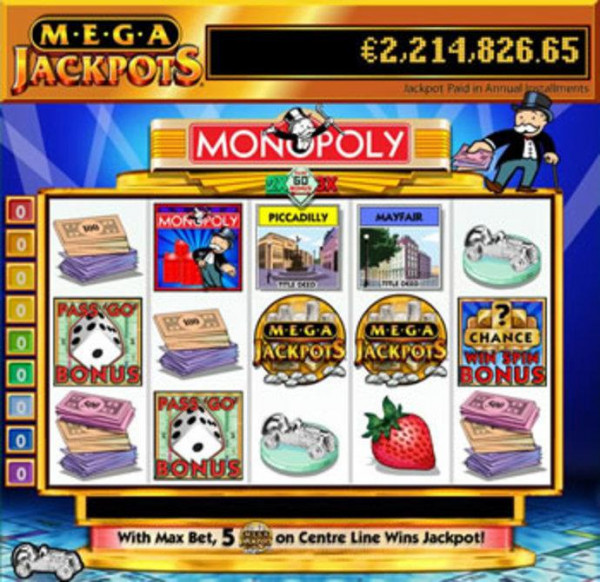 The only downside of this jackpot is that players have to wager 5 coins per line. However, if you do that, it’s down to luck. You simply have to receive five Mega Jackpot symbols in the middle payline.

Unlike in many progressive jackpot games, the Mega Jackpots Monopoly slot comes with a second bonus feature. The game's so-called Win Spin is triggered upon receiving three 'Chance' scatter symbols.

A player then needs to pick and click one of the symbols. This will reveal the number of 'win spins', which means that the reels keep spinning until a player wins unless he hits the 7th non-winning spin. Then, a player receives a multiplier of 10-times his total bet as consolation.

IGT managed to make the most of this theme and impresses with its super design. Mr Monopoly is highly detailed and appears in high resolution, the background is bright blue and the symbols are almost as 'real' as their original counterpart.

Coupled with great sound effects, the 5 reels and 9 paylines in Mega Jackpots Monopoly provide for many hours of gaming fun - very much like the original board game. The main difference, though, you won't be falling out over whose winning and who's losing with fellow family members or friends in this version of the popular Monopoly!

This second feature is also just available to those players betting the maximum. Bearing all this in mind, it is wise to first check the current jackpot amount before placing your bet. While there is no rights or wrongs, some players may not find any thrill in gambling high for ‘just’ a couple of thousand and only want to play this game if the jackpot stands at a few million. My best advice is to play with amounts that you can afford to lose. If you want to be in with a chance on the jackpot – which is prominently displayed above the reel – simply click the ‘bet max’ button. Certainly, a handy feature in any jackpot slot.

Our Verdict on Mega Jackpots Monopoly

Mega Jackpots Monopoly by IGT is a treat. Let's face it, this slot game isn't for every day, but is the kind of game you want to play once in a while when you are feeling lucky. After all, it's all about the jackpot and it's not every day this slot machine turns someone into a millionaire. Often enough, though, to make this IGT slot game super attractive.

The fact that this slot machine's progressive jackpot is connected to others in the IGT network is arguably what's best about this game. While loads of players are in with a chance to win the jackpot, once it's won, the jackpot reaches unbelievable heights rather quickly. As far as jackpot slots go, Mega Jackpots Monopoly is among my top choices.