Wrap up warm as we take a trip to a cold wintery artic setting in this latest title from popular software provider Lightning Box Games. This game takes place high up in the mountains where snow covers everything you see and the land is filled with lots of wildlife who know exactly what it takes to survive including bears, goats, and hungry wolves. The main attraction here is the elusive snow leopard which according to legend is guarding a trove of treasure between the mountains and canyons. Read on to find out if we can successfully track down this magnificent animal and see if it is willing to share some of its riches with us?

Lightning Leopard is a 5 reel slot with 40 paylines that comes with Respins, a Flippin’ Retrigger feature, and a Lightning Jackpot bonus game. 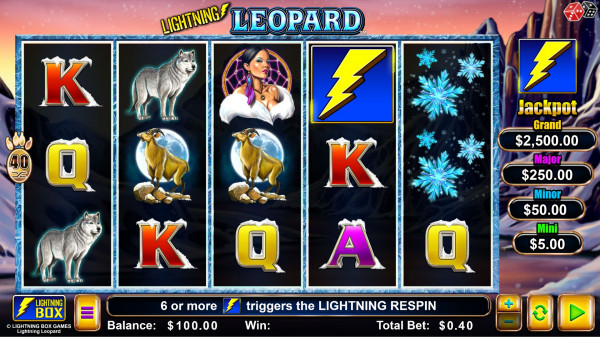 The first feature to discuss is the Wild symbol which is represented by an image of a Leopard. This symbol substitutes for all other symbols apart from the Scatter to help form winning combos and is the most valuable symbol in the game. Land 5 Wilds on an active payline to receive a cool cash payout worth 15X your stake!

An image of a lightning bolt surrounded by a bright blue background is the Scatter symbol in this game. Get 6 or more of these symbols on the reels to trigger the Lightning Respin bonus feature. Once activated, you will receive 3 Respins with the Scatters that triggered the feature locking into place. If additional Scatter symbols appear during Respins then they will also lock into place and the Respins will reset to 3 Respins. As soon the Respins end then all of the Scatter symbols will flip over to reveal a nice cash prize. These prizes are then added together to give out a nice big payout.

Keep a close eye on the Scatter symbols during the Lightning Respin feature as if you manage to collect 15 Scatters then you will trigger the Flippin’ Retrigger bonus round. In this fun feature, all of the Scatters are reflipped and all positions are guaranteed to reveal a cash prize!

The final feature to discuss is the Lightning Jackpot feature. This is a random feature which can trigger at the end of the Lightning Respin or Flippin’ Retrigger bonus rounds. It is possible to win one of 4 fixed jackpot prizes here with the Grand Jackpot prize being the biggest as it is worth a whopping 6,250X your wager! Like most Jackpot prizes, the higher the bet you place increases your chances of winning one of the jackpots.

The graphics are quite good as the game takes place in front of a snow-capped mountain with a dusky sky in the background. The reels are surrounded by an icy blue colour which is a neat visual touch. Symbols are nicely designed and consist of a Leopard, a Wolf, a Bear, a Goat, a Native American, as well as a bunch of classic A – J icons. The animations are crisp as symbols speed down the reels and burst into life by enlarging when part of a winning combination. For example, the Leopard will run at the screen and leave a trail of claw marks in its wake when it is part of a win.

The music is moody and atmospheric to encapsulate the Arctic theme of the game really well.


Our Verdict on Lightning Leopard

Top software provider Lightning Box Games produced this slot and it is a fun gaming adventure where finding a Leopard can lead to all sorts of cash prizes on the reels. Lightning Leopard features a nice range of bonus features such as Lightning Respin which triggers quite often and a Flippin’ Retrigger feature where you can claim massive cash payouts provided that you have collected enough Scatters to activate it. It is also great there are 4 fixed jackpot prizes on offer as well with the Grand Jackpot prize offering a mouth-watering 6,250X your wager! In terms of variance, I found this game to be quite High so be sure to have plenty of bankroll on hand before doing any leopard tracking! For slots with a similar Arctic theme, check out Siberian Storm and Wolf Cub.

Let the Leopard lead you to Big Wins on the reels when you play Lightning Leopard!