Take a trip down below to the fiery depths of Hell where a Leprechaun is melting gold for a cruel she-devil called Evilene.
casino game review jackpot slots leprechaun goes to hell play'n go slots

Leprechauns are mythical little people that reside in the land of Ireland and are often dressed in green and known to conceal a pot of gold somewhere. Now, there has been many Leprechaun-based slots released down the years so what makes this game from acclaimed software developer Play’n GO any different from all the rest? Well, for starters the leprechaun in this slot is not sitting pretty on a toadstool in a lush green forest somewhere in Ireland but in the fiery depths of Hell! This poor little leprechaun is being put to work on melting gold for the wicked she-devil Evilene. Can you help this mischevious little guy escape Hell so he can make it all the way back to his cushy toadstool in Ireland?

The slot has 5 reels with 25 paylines and comes with features such as Free Spins, Respins, an Infernal Bonus game, and 4 Fixed Jackpots. 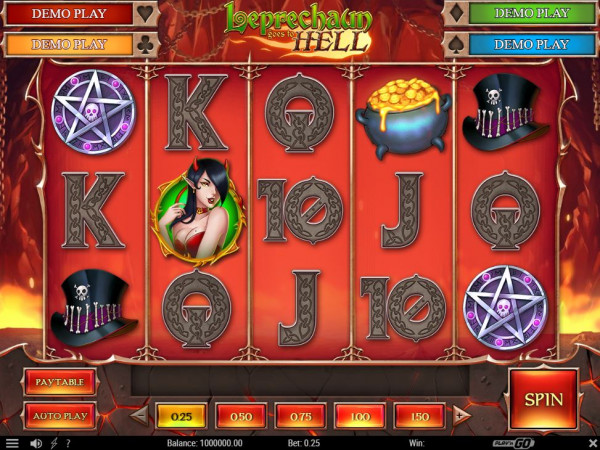 The first feature to highlight is that the game has not just one Wild symbol but two! The first Wild symbol is depicted by an image of the Leprechaun and it substitutes for all other symbols except the Scatter symbol. The other Wild symbol is an image of the nefarious she-devil Evilene. This symbol also substitutes for all other symbols apart from the Scatter but only appears on reels 2, 3, and 4. Make sure to keep a close eye on these Wild symbols as they are the highest paying symbol in the game and if you manage to land both symbols as part of a winning combination on the reels then your win will be nicely doubled.

The Scatter symbol is denoted by a black pot of melting gold. Manage to land 3 or more of these symbols and you will activate the Free Spins bonus game. In this feature, you’ll be given 10 free spins as well as a lovely 2X Multiplier. A pleasing aspect of Free Spins is that you can retrigger them by landing 3 more Scatter symbols while in this feature and the Multiplier value will increase by 2 as well. It is actually possible to land up to 50 Free Spins and a 10X Multiplier!

The Evilene symbol not only acts as a Wild symbol but also activates the nifty Respin feature and the main attraction of the slot – the Infernal Bonus game. To trigger a Respin, you just need to land 2 Evilene symbols on a spin and then the 3rd reel will be respun as a second chance to land another Evilene symbol.

To activate the Infernal Bonus game, you’ll need to land 3 Evilene symbols anywhere on the reels. In this great little bonus game, you will be taken to a new screen where you will receive 10 Free Spins to use on a 3 reel slot. Each time you land a Heart symbol on the reels, you’ll be given an extra spin. It is possible to land up to a maximum of 50 Free Spins in this bonus feature. Every time you land a win, you will increase the temperature of a thermometer that is placed beside the reels. There are 4 sizzling hot fixed Jackpots to aim for and the higher the temperature, the bigger the jackpot you can win. Naturally, the higher the bet you place then the higher the chances of winning a jackpot becomes.

The graphics in this game are fantastic. As soon as you load up the game, you are treated to a cool intro video that features some hot flames burning up the screen as Evilene and the Leprechaun present themselves to you. The game is set against a fiery backdrop consisting of dark grey stone and hot flames everywhere. Symbols are wonderfully detailed and consist of the Leprechaun, Evilene, a Trident, a Pentagram, a Green Potion, a Black Hat, and the standard A -10 icons. The animations are very impressive as symbols transform from evil versions to good versions whenever you land a win on the reels. For instance, the Trident symbol will become a lucky Horseshoe and the nasty Green Poison symbol will become a bubbling Green drink. It is a really nice touch.

The music is peculiar as it features Irish flute sounds mixed with agonising screams from Hell. It's a weird combination but suits the theme of the slot perfectly.

Our Verdict on Leprechaun goes to Hell

Play'n GO produced this game and it is really fun to play, contains a nice range of bonus features, and has one of the most unique themes involving a Leprechaun that you won’t find anywhere else! I was able to trigger Free Spins quite frequently while playing and the payouts can be huge especially when you retrigger more Free Spins with increasing Multipliers. I found this game to be of Medium to High variance so you might have to be a bit patient before you land some wins. The chance to win up to 10,000X your wager should reel in many a player to give this slot a spin or two!

Land a crock of gold worth a mighty fortune in Leprechaun goes to Hell!