Embark on another exciting tomb raiding adventure with the iconic tomb raider herself Lara Croft in this new release from Triple Edge Studios and Microgaming! This game is the third in the series of slots based on one of the most famous computer game characters ever created as it aims to replicate the success of the original Tomb Raider slot and its sequel Tomb Raider: Secret of the Sword. Once again, we found Lara in an ancient temple somewhere in Egypt as she navigates obstacles and puzzles to unveil the hidden secrets of the golden tomb which according to legend is guarded by the Egyptian Gods Set and Sobek. Let’s accompany Lara on her latest quest to see if we see can get our hands the elusive Golden Scarab Jackpot?

Lara Croft: Temples and Tombs is a 5 reel slot with 243 ways to win that comes with Rolling Reels, Free Spins, Increasing Multipliers, and a Jackpot feature. 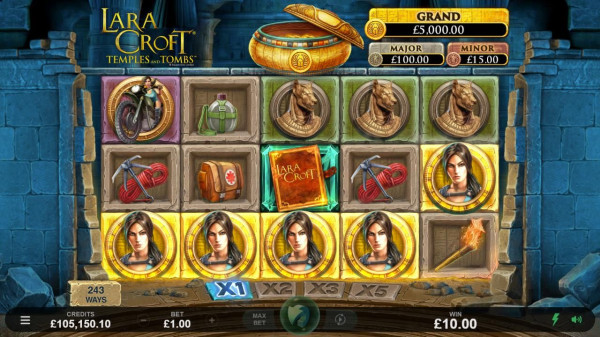 The first feature to highlight is that this game features Rolling Reels which is a cascading reels mechanic where symbols fall from the top and dissolve when part of a winning combination to be replaced by new ones from above. This means that it is possible to win again and again provided you keep on creating wins on the reels. Each time that you do form a win then you will also increase a multiplier value which starts at 2X and can reach a high of 5X.

The Wild symbol in this game is represented by a gold coin featuring a scarab design. It replaces all other symbols on the reels to help form winning combinations and only appears on reels 2, 3, and 4. Keep a very close eye on this symbol as you play the game as it is collected as you spin the reels to increase your chances of triggering the Jackpot feature. Once activated, you will then win one of 3 Fixed Jackpot prizes which are the Minor, Major, and Grand Jackpots. These Jackpots are worth 15X, 100X, and 5,000X your total bet. The more Wilds you gather than the greater your chances become of triggering this feature.

An image of a book with Lara’s name on it is the Scatter symbol in this game. Land 3 or more of these symbols on the reels to trigger the Free Spins feature. In this bonus game, you will be awarded between 8 and 32 Free Spins depending on how many Scatters you land to trigger it. Starting with a 3X Multiplier, each successive win on the reels in this feature can increase the Multiplier value to a new high of 15X! It is also possible to trigger this feature by landing 3 additional Scatters to get 8 Extra Free Spins with Wilds contributing to Free Spins triggers as well. You can get up to 48 Extra Free Spins to give you a grand total of 80 Free Spins altogether. We should also mention that the 4th and 5th reels are not considered for Free Spins awards during this feature.

The presentation of the game is visually stunning as it takes place in front of an ancient temple somewhere in Egypt with dilapidated stone columns propping up the reels along with a golden tomb entrance featuring images of Sobek and Set in the background. Symbols are intricately detailed and consist of Lara Croft in various poses along with images of Set and Sobek as well as Grappling Hooks, MediKits, Torches, and Water Bottles. The animations are absolutely fantastic as symbols crumble and dissolve when part of a win on the reels. A particular highlight is when you trigger the Free Spins game as it actually takes you inside the golden tomb which is filled with lots of hidden treasure. You are also treated to a few animated sequences of Lara here as well which is a neat visual touch.

The music is atmospheric and moody that rises in tempo as you land more consecutive wins on the reels. It matches the Adventure theme of the game perfectly.


Our Verdict on Lara Croft: Temples and Tombs

This game comes from Triple Edge Studios in partnership with Microgaming and we are happy to report is a gigantic leap forward for the Tomb Raider series. For starters, it is visually superior to its predecessors which is not that hard considering since they look rather dated these days. In terms of bonus features, this game has lots to offer with Rolling Reels with Increasing Multipliers along with 3 Fixed Jackpots. Be sure to collect as many Wilds as possible for the chance to win one of the 3 Jackpots! The most rewarding feature of the game is without a doubt the Free Spins Bonus Game as it is here where you can benefit from massive 15X multipliers which can lead to a top prize worth a whopping 7,343X your stake! Variance-wise, I found this slot to be High so make sure to have lots of bankroll in your pocket before going tomb raiding with Lara here! For slots with a similar Tomb Raiding theme, check out Rich Wilde and the Book of Dead and Ark of Mystery.

Unravel the Book of Secrets to reveal a temple of riches in Lara Croft: Temples and Tombs!